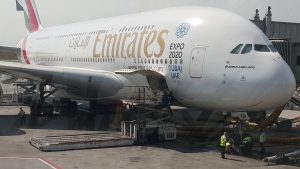 Emirates has announced plans to reduce service to the USA amid fallout from the Trump administration’s new immigration restrictions and its ban on electronic items in airline cabins from the Middle East.

The number of weekly flights from Dubai to the USA will be reduced from 126 to 101.

The Dubai, United Arab Emirates-based airline says it will cut down on the number of flights to five of the 12 cities it serves in the US.

Starting May 1, flights to Fort Lauderdale, Florida, will be reduced from daily flights to five flights a week. The airline says it will make the same cuts to its Orlando, Florida, service starting May 23.

Starting June 1 and 2, Seattle and Boston service will be reduced to a single daily flight from two previously. Finally, beginning July 1, Emirates’ twice-daily service to Los Angeles will be cut down to a single flight. LAX is a bit confusing as EK217/218 had already been announced as a temporary cancellation from 1 May to 1 July 2017. Now the cancellation is indefinite.

An Emirates spokesperson said that “the recent actions taken by the US government relating to the issuance of entry visas, heightened security vetting, and restrictions on electronic devices in aircraft cabins have had a direct impact on consumer interest and demand for air travel into the US.”

Here is Emirates’ statement in its entirety:

“This is a commercial decision in response to weakened travel demand to US. The recent actions taken by the US government relating to the issuance of entry visas, heightened security vetting, and restrictions on electronic devices in aircraft cabins, have had a direct impact on consumer interest and demand for air travel into the US.

“Until the start of 2017, Emirates’ operations in the US have seen healthy growth and performance, driven by customer demand for our high quality product and our international flight connections. However, over the past 3 months, we have seen a significant deterioration in the booking profiles on all our US routes, across all travel segments. Emirates has therefore responded as any profit-oriented enterprise would, and we will redeploy capacity to serve demand on other routes on our global network.

“We will closely monitor the situation with the view to reinstate and grow our US flight operations as soon as viable. Emirates is committed to our US operations and will continue to serve our 12 American gateways — New York JFK (3x daily non stop and daily via Milan), Newark (daily via Athens), Boston, Washington DC, Chicago, Seattle, Los Angeles, San Francisco, Houston, Dallas, Fort Lauderdale, and Orlando — with 101 flight departures per week (reduced from 126).”

This makes any new USA destinations very unlikely in the foreseeable future. There had been rumours of Phoenix, Las Vegas, Detroit, and others that were less likely!

This also means that there are airframes that can be used for other opportunities. Or they stay grounded. China would be the obvious growth but while Dubai welcomes a number of Chinese carriers Emirates itself appears to be heavily restricted from growing in China.

It will be interesting to see how Qatar and Etihad respond – although Etihad in particular has only a limited exposure to the USA.