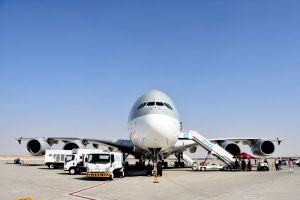 In classic Qatar Airways fashion their CEO has made another dramatic statement of new route plans – without any details about frequency, equipment or start date.

New routes planned for 2018 include:

Qatar Airways has delayed plans to start flights to Las Vegas until the second quarter 2018, from the first quarter of that year, “mainly due to technical reasons,” al-Baker said without explaining further.

In November 2016 Qatar announced flights to eight new destinations: none of these have actually started flying yet and three of the destinations have no announced start date.

Previously in the first half of 2016 Qatar had announced 2017 launches to seven destinations: only one of those routes has actually started.

So of 15 new destinations announced in 2016 only one has so far started flights and 7 have no announced start dates.

Suggestion – take Qatar route announcements as a statement of intent rather than a definite plan!

In other Qatar news:

Qatar Airways will also sign in the next “few days” an agreement with Italy’s Meridiana. Qatar Airways has been negotiating to buy a 49 percent stake in the Italian airline for over a year. I have no idea what the upside is for Qatar – other than that Meridiana is currently owned by the Aga Khan.

The Doha-based airline will also make an application with the Qatar Investment Authority (QIA) for an Indian airline operating license in the next “few weeks,” he said.Qatar Airways has said it plans to operate a domestic Indian carrier with around 100 jets.

That could be a big play to grab traffic from India and route it through Qatar.