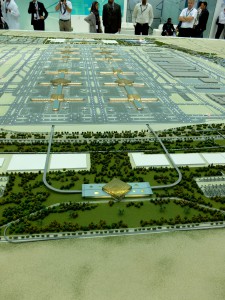 But it does make it clear that

a) The existing DXB will need to be expanded further to a maximum capacity of 118 million passengers. Current capacity is about 100 million.

b) That the plan is to move Emirates to AL Maktoum in 2025 when the capacity of the new airfield is 130 million; the main contact terminals for Emirates managing 104 million with a 26 million capacity in the extended low cost terminal on the south side of the airport.

Emirates carried 56 million passengers in the last financial year. By 2025 that number might be up to 70 million. So there would be some room for other airlines to also move to Al Maktoum in 2025; but some residual traffic would operate through DXB.

The plan suggests that in five years after 2025 the capacity of Al Maktoum will increase from 130 million to 240 million in 2030 as new terminals are added. That rate of growth is probably optimistic.

“Our motivation behind doing this is to raise aviation’s share of Dubai’s GDP to 45 percent by 2030,” Griffiths told a private gathering of industry leaders yesterday.

By 2030, aviation is forecast to generate close to 1.2 million jobs and employ 35 percent of the city’s workforce.

That may be an excessive dependence on a single industry for one city; through the passenger and job numbers drive everything else from property to tourism to medical.

The plan is to grow capacity at DXB with small and mid-sized infrastructure improvements to 118 million by 2023. DWC’s passenger terminal (non-contact gates built for low cost carriers and smaller airliners) expansion will bring traveller levels to 26 million next year before phase 2 will deliver add 104 million in capacity by 2025 when Emirates Airlines is being scheduled to move to operations to the airport.

Dubai’s ruler Sheikh Mohammed had approved plans for the new airport expansion at a cost of $32 billion in 2014.

Last week the city sealed a $3 billion plan for long-term financing toward the first stage of DWC’s expansion.

There is a very long way to go.