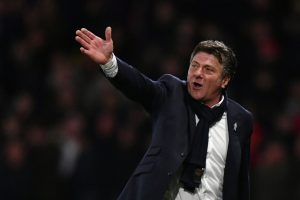 Another season ends and another Watford manager leaves.

He will not be remembered. His football was plodding and dull. His instincts cautious. He never spoke English. He shouted from the touchline in Italian. He had no relationship with the players or the fans.

BUT – he did keep Watford in the Premiership. A club with limited resources; a small town club dwarfed by the big teams of London.

I though Henry Winter nailed our season in one tweet:

Pozzos’ speed-dating with managers continues. Mazzarri bit of a mystery man; little English or rapport with staff/fans but kept Watford up.

As for the next Watford manager – he will be my 25th! It would be far more if not for Graham Taylor’s 14 years over three separate appointments.

Who replaces Mazzarri – Marco Silva or Garry Monk would both be interesting choices. Or Alan Pardew? But not Claudio Ranieri please.