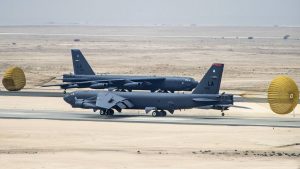 On Monday morning the big four Gulf partners, KSA, UAE, Bahrain and Egypt turned on our neighbour, Qatar. Qatar is the local minnow.

Diplomatic ties have been terminated. Airspace and territorial waters have been closed to Qatari owned transport. And the KSA has closed its border with Qatar, this is Qatar’s only land border.

Qatari citizens in the UAE have 14 days to leave the country. Qatari diplomats just 48 hours. The same applies in Egypt, Bahrain and KSA.

Etihad, Emirates, flyDubai and Air Arabia have all terminated flights to Qatar from 6 June. Flights on Gulf Air and Egyptair are also suspended.

There are reports of panic buying in Doha and if the stand-off continues, the possibility of stock shortages will increase in the next few weeks.

What happens next will depend on the Qatari Emir’s response.

The KSA and the UAE claim the support of President Trump, emboldened by his visit and a series of tweets that effectively praised their action. So much so that today’s Gulf News front page headline said: “Trump points to Qatar’s terror role.”

Both sides have been seeking international support. The Europeans are non-committal. A number of smaller states such as Mauritania and the Maldives have also broken off ties with Qatar

Meanwhile both Turkey and Iran appear to be offering support to Qatar.

There really are only two options available to Qatar. One is a quickly negotiated solution that saves as much face as possible. The other, less likely, would risk an escalation where Qatar retaliates after gaining domestic and international support.

Qatar Airways is badly affected – 55 flights a day have been cancelled to the UAE, Egypt, KSA and Bahrain. These all provide feeder traffic to the Doha hub. Flights from Doha to Africa, Latin America and South Asia and South East Asia are likely to experience delays as they will have to reroute to avoid Egyptian, Emirati and Saudi airspace. They have a single exit flightpath available through Bahrain airspace.

Further steps against Qatar aviation would require Saudi Arabia and its partners to block non-Qatari carriers from using their airspace for all flights to and from Qatar.

At issue is that the three Gulf States (Bahrain, KSA, UAE) do not feel that Qatar has lived up to its side of a 2014 agreement that defines the Gulf Cooperation Council relationship incorporating pledges by Qatar to deal with grievances at that time.They are also allege that Qatar-owned Al-Jazeera seeks to manipulate public opinion for political goals and has become a propaganda tool for extremist groups.

It is a reasonable view that the Gulf States will demand the closure of Al Jazeera TV Network before any mediation can take place.

If al-Jazeera does survive there will be serious controls over what it can and cannot broadcast and over it’s editorial strategy.

This might only apply to its arab language network; but the english network may not be viable on its own.

The three Gulf States also wish to reign in Qatar’s ties with Iran; that said other Gulf countries such as Oman have established relations with Iran. Qatar and Iran share a valuable common gas field.

Finally Qatar will be expected to sever any ties with extremist groups including, but not only, the Muslim Brotherhood and groups in Yemen.

None of this can be good for Qatar long term. Qatar imports over 90 percent of its food, and by one estimate about 40 percent of that comes from the its only land border, which is now closed.

That may just be a start. Gulf media has hinted at an escalation of the dispute with Qatari commercial and trade ties being severed next.

Yesterday the UAE said that Qatar would need to provide a “guaranteed roadmap” before it would consider mending ties. Qatar is going to have to allow oversight to re-establish relations.

One thing is certain – we will not be going back to the status quo of last week. This is a demand for change.

Judging by the Qatari reaction so far, this may take weeks or months to resolve.

Now the USA’s position is complicated. While the President is busy praising the action taken against Qatar he has the small issue of 10,000 military personnel and a huge base in the country.

America’s military ties with Qatar are essential to ongoing military operations in the region, including Iraq, Syria and in Afghanistan.

Al Udeid air base in Qatar houses the Combined Air Operations Center (CAOC). Aviation assets alone include everything from E-3 AWACS, to tactical fighters, B-52 Stratofortress Bombers, and more. See the picture above.

So how does the US military continues to operate out of a country that its neighbors claim is actually supporting the very same forces America’s operations from that country are trying to target and destroy?

Confused – welcome to the muddy waters of the Middle East in 2017.

Commentators, bloggers and journalists will be taking extra care in the UAE to avoid any speculation on this dispute. It is also why I will not be writing much more until this is resolved.

Emirati Attorney General Hamad Saif al-Shamsi’s announced today that “strict and firm action will be taken against anyone who shows sympathy or any form of bias towards Qatar, or against anyone who objects to the position of the United Arab Emirates, whether it be through the means of social media, or any type of written, visual or verbal form,”

Anyone guilty of so doing could be imprisoned for as many as 15 years and fined no less than 500,000 Emirati dirhams (US$136,000) under the penal code and the law on Combatting Information Technology Crimes.

For expatriates in the UAE the major impact is the blocking of BeInSports – and to a lesser extent the fact that travel to or through Qatar is no longer possible.

Finally – how does this impact the 2022 World Cup? That probably depends on how this dispute is resolved.