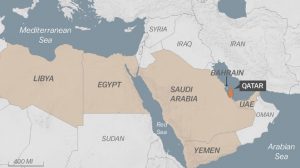 The Economist has a sensible piece this week on the current feud in the Gulf and the potential for escalation.

Tribal feuding among the Al Thanis, Al Khalifas, Al Sabahs and Al Sauds has been the norm for centuries. From their beginnings in Nejd, the barren interior of the Arabian peninsula, they sparred for the best coastal spots from which to launch pirate raids into the Gulf. But even at the height of acrimony, they always observed unwritten rules of refuge and hospitality. When the tribes became states five decades ago, their people still travelled, lived and intermarried across lines in the sand.

Their sheikhs might withdraw their ambassadors when tempers flared, but when King Salman of Saudi Arabia went to war in Yemen in 2015, he let more than a million Yemenis in his kingdom stay.

For Gulf Arabs, the expulsion of Qataris by Bahrain, the United Arab Emirates (UAE) and Saudi Arabia ordered on June 5th is more shocking than a declaration of war.

It has torn up their code of conduct. With two weeks’ notice to leave, Saudi husbands fear they might forfeit their livelihoods if they follow their Qatari wives. The queues at Qatar’s only land border, with Saudi Arabia, already tail back for miles. The dunes have become barriers, preventing the entry of people and goods, including much of Qatar’s food supply.

Short-haul tourism has collapsed. The UAE has criminalised any expression of sympathy for Qatar, tweets included. Diplomatic ties have been severed, and air, land and sea links closed by the three neighbours, as well as by Egypt and Yemen.

Protruding like a sore thumb from the Arabian peninsula, tiny Qatar has long bugged its neighbours. But the explanations offered for the sudden, unprecedented closure seem inadequate.

Only a fortnight beforehand, the Qatari emir had stood smiling alongside those who have now banished him. In a show of unity, they feted Donald Trump, the American president, in Riyadh. Saudi Arabia blames Qatar’s involvement in terrorism, which to those recalling the role Saudi jihadists played on 9/11 sounds rich.

Qatar’s ties to Iran, too, irk Saudi clerics and kings, particularly the joint and expanding development of South Pars, the world’s largest gasfield. But Kuwait and Oman are on similarly good terms with the Islamic Republic, and Dubai, one of the UAE’s seven emirates, provided the biggest back door into Iran when the world imposed sanctions on it.

The pretensions of Qatar’s ruling Al Thani family to global grandeur have also vexed other rulers. The statelet has sought significance by offering a sanctuary to the Muslim Brotherhood, the Arab world’s foremost Islamist movement. Diplomats found in Qatar a place in which to talk to Islamists, including Yousef Qaradawi, the Brotherhood’s favourite preacher; Khaled Meshal, until recently the leader of Hamas, the militant Palestinian group; Abbassi Madani from Algeria; and several of the Taliban’s leaders.

A media empire led by Al Jazeera, a satellite TV channel, has for decades helped Qatar find a mass audience. It offered a platform to dissidents from across the region (except Qatar), giving voice to popular anger which erupted in the Arab spring of 2011. It then goaded revolutionaries to take up arms, and endorsed Islamists who stood in elections. Qatar bankrolled their campaigns and filled their coffers when they took power.

The Arabian peninsula is not big enough, however, to realise all its rulers’ ambitions. Rivalries have grown as each struggles to create global shipping hubs, airlines, media arms, expeditionary forces and financial districts. A generation ago the Gulf was led by consensus-builders, whose prime concern was stability. But petrodollars, vast arsenals and Mr Trump’s blessing risk turning their descendants into vainglorious autocrats with talents for inflaming, not compromising.

Saudi Arabia’s young deputy crown prince and de facto ruler, Muhammad bin Salman, it is said, likes to be called Alexander [the Great]. Their intelligence agents run amok, spreading dirt on each other, true or false. One of the triggers offered for the latest showdown is the revelation in Qatari-owned media of e-mails purportedly hacked from the account of the UAE’s ambassador in Washington, Yousef Otaiba.

For now, the Al Thanis have the means to withstand the pressure. The sheikhdom is the world’s biggest supplier of liquefied natural gas.

Mr Trump might celebrate Qatar’s come-uppance in tweets, but he must still consider the roughly 10,000 soldiers stationed there at al-Udeid, America’s largest air base in the Middle East (though the Emiratis would prefer he move it their way).

Egypt, which has also severed ties, knows that Qatar may retaliate by expelling its workers if it hinders Qatari exports through the Suez canal. Even the UAE worries that Qatar might shut off the gas pipeline supplying its domestic market.

But things can get much nastier. After Saudi Arabia closed Qatar’s only land border, Iran offered to make up the shortfall. If Qatar drifts further into Iran’s orbit, Gulf officials warn that more “punitive, economic measures” could follow. An attack, claimed by Islamic State, on Tehran’s parliament on June 7th has heightened the tension: Iran is blaming Saudi Arabia, though without evidence.

There will be few winners. Airline embargoes harm tourism across all Gulf states, in the eyes of foreigners who cannot tell one sheikhdom from other, just when they are trying to diversify their economies.

If only the world had a superpower focused more on diplomacy and less on selling weapons.