Home→Dubai→List of demands that Qatar must meet 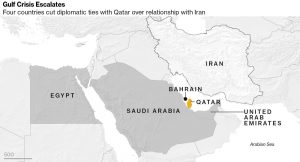 Saudi Arabia and other Arab countries that have cut ties to Qatar issued a strong list of demands on Thursday, insisting that Qatar close the Al-Jazeera tv network, cut back diplomatic ties to Iran and sever all ties with the Muslim Brotherhood.

The 13-point list, presented to the Qataris by Kuwait, which is helping mediate the crisis, also demanded an end to Turkey’s military presence in Qatar.

The Associated Press obtained a copy of the list in Arabic from one of the countries involved in the dispute.

Here are the demands as set out for the AP:

1. Curb diplomatic ties with Iran and close its diplomatic missions there. Expel members of Iran’s Revolutionary Guard from Qatar and cut off any joint military cooperation with Iran. Only trade and commerce with Iran that complies with US and international sanctions will be permitted.

3. Shut down Al Jazeera and its affiliate stations. (note affiliated would include AJ English and BeIn Sports).

5. Immediately terminate the Turkish military presence currently in Qatar and end any joint military cooperation with Turkey inside Qatar.

6. Stop all means of funding for individuals, groups or organisations that have been designated as terrorists by Saudi Arabia, the UAE, Egypt, Bahrain, the US and other countries.

7. Hand over terrorist figures and wanted individuals from Saudi Arabia, the UAE, Egypt and Bahrain to their countries of origin. Freeze their assets, and provide any desired information about their residency, movements and finances.

9. Stop all contacts with the political opposition in Saudi Arabia, the UAE, Egypt and Bahrain. Hand over all files detailing Qatar’s prior contacts with and support for those opposition groups.

10. Pay reparations and compensation for loss of life and other, financial losses caused by Qatar’s policies in recent years. The sum will be determined in coordination with Qatar.

11. Align itself with the other Gulf and Arab countries militarily, politically, socially and economically, as well as on economic matters, in line with an agreement reached with Saudi Arabia in 2014.

12. Agree to all the demands within 10 days of it being submitted to Qatar, or the list becomes invalid. (The document doesn’t specify what the countries will do if Qatar refuses to comply).

13. Consent to monthly audits for the first year after agreeing to the demands, then once per quarter during the second year. For the following 10 years, Qatar would be monitored annually for compliance.

Note the 10 day compliance deadline. It is unclear if this is a definitive list or the start of a negotiation but I imagine the response in Doha was like me sometime to Air Traffic Control – “cannot”.

The list includes conditions that Qatar has already insisted would never be met, including closing down Al-Jazeera.

Someone on twitter likened that to Europe telling the UK to close down the BBC.

Qatar’s government has said it won’t negotiate until Arab nations lift their blockade.

Only a day earlier, USA Secretary of State Rex Tillerson had warned the demands must be “reasonable and actionable.”

The broad expectation is that Qatar aligns itself politically, economically and otherwise with the Gulf Cooperation Council, joining the group in countering the influence of Iran.

Cutting ties to Iran is complicated by the fact that Qatar shares a massive offshore natural gas field with Iran which is the source of Qatar’s wealth.

Meanwhile Al-Jazeera, which is now blocked in the UAE, was one of the most widely watched Arabic news channels. However it has long angered Mideast governments for airing alternative viewpoints while avoiding any criticism of Qatar. The network’s critics say it advances Qatar’s goals by promoting Islamist movements like the Muslim Brotherhood that pose a populist threat to rulers in other Arab countries.

If Qatar agrees to comply, the list asserts that it will be audited once a month for the first year, and then once per quarter in the second year after it takes effect. For the following 10 years, Qatar would be monitored annually for compliance.

I have said before – this dispute has a long way to go still.

Brian Whitaker (the former ME editor of the Guardian) wrote this for al-bab:

Ultimatum to Qatar: surrender within 10 days, or else …

And in the Guardian: