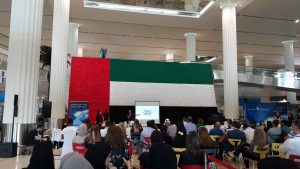 So I landed back at DXB on Tuesday as I walked into the arrivals area a company called Hackmasters had set up next to Costa to present the results of their week of work with the Dubai Airports team.

Lets start with who are Hackmasters. A company that says that it delivers innovation at speed with focus. The company argues that it makes the future a reality by making it now instead of talking about it in meetings.

A company that turns ideas into prototypes and into pilots in record time.

Hackmasters is a network of people that desire to challenge what is considered hard or impossible.

So that is Hackmasters, and there were plenty of them presenting and standing around at the presentation; but first impressions matter and the Hackmasters team could not even manage a decent looking presentation; the small screen was unreadable; the presenters were weak.

Maybe this was not meant for outsiders; but if that was the case it should not have been held in a public area.

Their work at DXB is meant to be part of the DubaiX initiative that wants to position Dubai as a global capital of innovation in the next 10 years. This was launched earlier this year during the World Government Summit.

His Highness Shaikh Mohammad Bin Rashid Al Maktoum, Vice-President and Prime Minister of the UAE and Ruler of Dubai instructed government departments in Dubai to start implementing today what other cities in the world will begin implementing after 10 years.

The catch with this, which I will come to below, is the gap between ambition and reality.

The presentations were on the future of DXB; oddly the focus was DXB, there was no mention of DWC; maybe because any move of the major airlines to DWC is ten years away.

So what was the Hackbusters proposition for DXB:

Initially there were some interesting ideas – such as the airport generating its own energy and becoming energy neutral. That has real appeal.

There was talk of an Autonomous Adaptive Airport – driven by data and using artificial intelligence to analyse a situation, predict the outcomes and action solutions. This made sense in terms of ensuring the airport was properly resourced in the event of fog delays for instance.

Their claim was to have “a grand vision of the future – something that not many people have.” Arrogant – certainly.

Because in the end their product was no more than finding ways to retain and monetize the transit passenger.

Instead of over 60 million passengers flying through to their final destination the intent is that they stop for a day or days in Dubai. This is all facilitated by software and products that would allow you to change your plans, and book and pay for hotels tours etc while inflight.

The proposal would be to connect DXB to Dubai as a smart city. Connecting the airport to the transportation networks and to the city’s main attractions. Which is all work that is in progress already.

There would be fast pass lanes for customs and security – removing the visible constraints at the airport to allow people into the town and back to the airport.

Transit passengers would be given a wearable device that they could use for payments and rebookings and that would remind them of their itinerary and timing; notify them of cancellations or delays.

At its most optimistic Hackmasters talked of using just a snap of the fingers to extend a stay in Dubai or to rebook a flight.

So this is basically about building a smart booking system interfaced to hotel and airline networks.

3m of work to build out its data program and analysis; to test its booking program and to build a prototype of its wearable device.

In 1 year they would role out their product in Dubai Airport and on inflight systems.

But here is the problem; no one seems to have talked to the 60million plus transit passengers that come through DXB. Hackmasters no doubt flew business class as do the executives at Dubai Airports.

But the business and first class traveler is a minority at DXB. Say the airport has 100 million passengers in 2017- then maybe 90 million of them will be in economy.

What does the economy transit passenger want:

But above all else a transfer passenger has booked on Emirates because he or she gets a cheap fare that takes them where they want to travel to. They have a couple of weeks vacation. They want to be on a Bali beach or with family in Athens; not in a Dubai hotel.

And the fare matters – if it is cheap enough they will fly through Qatar or Abu Dhabi or Istanbul. Or they will fly point to point on the newer airliners such as the 787 and A350 bypassing the mega-hubs.

And how flexible will airlines be? Passengers book cheap fares in economy. It is not a flexible fare; dates and names cannot be changed and airlines charge significant rebooking fees.

Ambition is good. But the realities will be incremental changes rather than a massive change in the way people travel.