Home→Aviation→flydubai and Emirates – an engagement not a marriage? 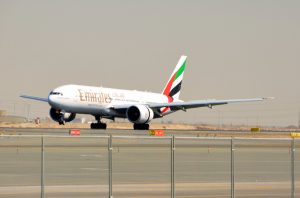 Emirates and flydubai on Monday announced a significant partnership agreement that will see the two airlines join forces for the first time.

We all know Emirates – the 31 year old Dubai based international carrier and operator of the largest feet of A380s.

flydubai started in July 2008 – it is not a part of the Emirates Group although Emirates supported flydubai during the initial establishing phase. Like Emirates flydubai is also owned by the government of Dubai.

The airline was basically Dubai’s answer to Sharjah based Air Arabia – and to the grwth of other regional LCCs.

The first aircraft was delivered on 17 May 2009. Scheduled flights commenced on 1 June, with services to Beirut, Lebanon and Amman, Jordan. Since then, the route network has been significantly expanded.

flydubai operates entirely out of Dubai and currently has its headquarters in Terminal 2 at Dubai International Airport. There are a handful of flights operated from the Al Maktoum airport – DWC.

Interlining between Emirates and flydubai has always been possible. For instance – If you buy a ticket with Emirates and part of your journey is with flydubai, you can pick up your baggage at your final destination – you won’t have to collect it in Dubai.

There is a coach transfer between T2 and T3 for Emirates and flydubai passengers but the minimum transfer time is 2 hours.

So yesterday the two airlines announced a new partnership with an “expansive” codeshare agreement, as well as increased schedule alignment and network optimisation.

For instance both airlines have medium range flights to Bangkok and Prague. It makes more sense for these to be on EK equipment rather than flydubai (FZ).

The goal is that the two airlines’ combined network will to cover 240 destinations by 2020, served by a combined fleet of 380 aircraft.

However, this is an engagement and not a marriage. There is no merger. I suspect that is pragmatic and cost-saving.

So both airlines will continue to be managed independently with no plans for a full merger.

Emirates and flydubai said in a statement on Monday: “The innovative partnership goes beyond codesharing and includes integrated network collaboration with coordinated scheduling.

It sounds wonderful – but how? FZ is over at T2. The other side of the airfield. Without a train tunnel to link the two terminals the connection times will be long and far from seamless.

An Emirates spokesperson declined to comment on whether plans would be hatched to construct an internal link between flydubai’s hub Terminal 2 and Emirates’ Terminal 3. Presumably because no – one knows!

Teams from Emirates and flydubai are currently working on several initiatives spanning commercial, network planning, airport operations, customer journey, and frequent flyer programmes alignment. They have a great deal to do.

The partnership will be rolled out over the coming months, with the first code-sharing arrangements starting in the last quarter of 2017, the airlines said.

Here is the heart of the problem. DXB is full. Peak times have no slot availability. The plan was for FZ to move all its operations to DWC in 2018. The LCC terminal at DWC is currently being expanded to manage some 25 million passengers a year. But there are still no contact gates. Buses to and from the airplane are standard.

The midfield terminal buildings for Emirates and full service carriers are unlikely to be available until after 2025.

So then what happens?

Does FZ stay at DXB; and by aligning schedules slots are freed up for new flights and destinations.

Does Dubai AIrports move all other point to point (O&D) carriers at DXB to the new airport at DWC. There would be uproar. Like it or not, DWC is still in the wilderness some 65 kms from DXB and with shocking transport connections other than expensive taxis or rare buses.

What this is really about is bolstering feeder traffic into Emirates. Think of it as Dubai’s answer to the connections from Qatar’s short haul to long haul fleet, from Silk Air to Singapore Air or even Thai Smile to Thai Airways.

But until the logistics of fast, easy transfers can be resolved any transfer between the two carriers will remain the least pleasant part of the passenger journey.

The other obvious statement to make is that it is clear who the big brother is in this relationship. EK will call the shots. FZ is the feeder.

Some quick wins are needed. Things that are visible to and a real improvement for passengers. Otherwise this will look like another piece of news-making pr; ambition without reality.