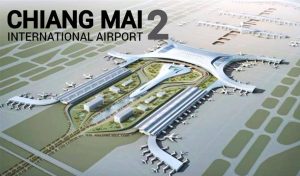 I am trying to understand the debate over the future of Chiang Mai’s airport.

I think this is where things are right now: if I have got this right the RTAF owns CNX – much like they own Don Muang. (now DMK).

The AoT believe a new airport is necessary in Chiang Mai for growing trade and tourism in the north of the country. They have suggested a site in San Kampeng, coincidentally where the smal Nok and Lanna airfields are located.

Suvarnabhumi should have been a lesson – it was meant to replace Don Muang but when it opened it was already too late and too small – and DMK had to be reopened to accommodate the growing number of flights especially LCCs.

Only now – ten years after opening has work started on the midfield terminal at BKK – again too late….it will probably open in 2019.

Planning and building airports need years of forward planning – just ask the British who are still fighting over a third runway at Heathrow.

But the Middle East countries and many Asian nations understand the importance of air travel and plan and build accordingly.

In 2016 Dong Zhiyi, a Deputy Director of the Civil Aviation Administration of China (CAAC) said that China plans to build 66 new airports over the next five years. They build for the future.

Something has to be done about CNX. It is not a busy airport in terms of arrivals and departures but it is already creaking at the seams from under – investment. In the short term money can be spent to extend the life of CNX and grow its pax capacity. The existing terminal should probably be entirely for domestic use and a new international terminal built. Qatar starts flights in December – there are ever more flights from China. India, Korea, Singapore and Japan are all under-served for non-stop flights. New car parking is urgently required. There will need to be investment in apron expansion and airbridges.

But CNX only has so much space that it can expand into. A second runway looks impossible – and its central/city location means that there will always be noise abatement restrictions and limits of the number of night flights.

In 10+ years Chiang Mai needs a new airport, with all the necessary road and rail connections to the city (and to the region – eg high speed rail to Chiang Rai and Lampang) with at least two runways, a 30m passenger capacity with room to double that within 10 to 15 years of opening, and a logistics park and freight operation. Planning for that – requisitioning of land – arranging financing – all should start now.

The old airport would then be closed – its central location means it would be an ideal development site – almost a mini new city of housing, retail, business park, tech ventures, sports stadium etc!

Expanding the existing airport while building a new one has to be the best way forward – but it will be costly.

The mantra in Field of Dreams was if you build it they will come….

Or maybe we just muddle along because the RTAF and the AoT cannot agree a way forward….