Home→Dubai→The GCC dispute could “drag on for years” 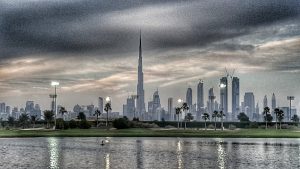 As the Gulf nations dispute is well into its fourth month it is clear that there is no end in sight – unless one side backs down with an enormous loss of face.

Instead this dispute could drag on for years.

The Saudi led group that is blockading Qatar is pushing for regime change – and for a regime that accepts and acquiesces to Saudi Arabia’s regional domination.

Qatar will not do this. It will not become another Bahrain.

So the dispute goes on – and as this Economist article shows it is not just Qatar that is being hurt by the fallout.

“If Saudis and Emiratis will not trade with Doha, Iranians will

The largest insurer in the Gulf should have taken out a policy on itself. Last year Qatar Insurance collected about 110m rials ($30m) in premiums from its Abu Dhabi office. But in September it announced that, because of a diplomatic dispute, the United Arab Emirates (UAE)would not renew its business licence, forcing it to close its branch in the Emirati capital. Its stock price has fallen by 30% since the beginning of the summer.

It has been more than four months since Saudi Arabia, the UAE, Bahrain and Egypt closed their borders and cut diplomatic ties with Qatar. The so-called quartet wants the little gas-rich emirate to stop supporting Islamist groups, including the Muslim Brotherhood, and to shut down Al Jazeera, the Arab world’s most popular broadcaster, which Qatar sponsors. The dispute has become personal, with diplomats hurling insults in Cairo last month. Officials in Doha, the Qatari capital, expect it will drag on for years.

Qatar can weather it, but at a steep price. Its government injected some $39bn into the Qatari economy from its reserves of $340bn, reckons Moody’s, a ratings agency. Last year other Gulf countries accounted for almost half of tourists toQatar. Arrivals from them have fallen by more than 70% since June. Hotel-occupancy rates were about 50% this summer, some ten percentage points less than a year ago. Trade has slumped.

But the boycott is also hurting others across the Gulf, including some of the countries that imposed it. Particularly hard-hit is Dubai, a services hub for the region. Qatari firms that do business in the UAE all use local partners, and many are feeling the pain. One public-relations executive says her firm is discussing layoffs after losing a Qatari contract. Estate agents say the crisis will also hit Dubai’s property market: Qataris bought about $500m-worth of property there last year alone.

South of Dubai’s glittering skyscrapers lies Jebel Ali, the busiest port in the region. It handles more than a third of cargoes in the Gulf and, before the boycott, 85% of shipborne cargo for Qatar. Neighbours have long wanted to grab its market share. In September Qatar opened a new $7.4bn port, years in the making, that allows shippers to bypass the UAE altogether. Saudi Arabia is building a port on its west coast, near Jeddah, just south of the Suez canal. The blockade will accelerate this shift from Dubai. Qatar Navigation, a shipping conglomerate, is moving its regional hub from the UAE to Oman, which has not joined the boycott. Its trade with Qatar grew by 2,000% this summer. Traffic at its port, Salalah, is up 29%.

The blockade is also weakening the six-country Gulf Co-operation Council (GCC), of which Qatar, Saudi Arabia and the UAE are members. Although it was never much of a political union, it had at least allowed goods and people to move freely across borders. But the boycott has upended that.

It is also, ironically, rewarding the GCC’s biggest rival. Trade between Qatar and Iran was $98m last year. Iranian exports to Qatar grew by about 60% this summer. With Saudi airspace closed, scores of Qatar Airways flights now arc over Iran each day. The airline pays a hefty overflight fee for each one. “If the crisis goes on for years, we’re talking about hundreds of millions of dollars in new revenue for Tehran,” says an economist in Dubai.”