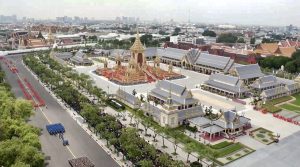 After one year of mourning Thailand today says goodbye to the only King that almost all Thais have ever known.

Bhumibol Adulyadej died on 13 October 2016 at the age of 88. He was the ninth monarch of Thailand from the Chakri dynasty ruling as Rama IX.

After a year of mourning this is the day that the Thai people say their farewell.

Born in the United States in 1927 Bhumibol would reign over Thailand from 9 June 1946. He was, at the time of his death, the world’s longest-serving head of state, serving for 70 years, 126 days. During his reign, he was served by a total of 30 prime ministers beginning with Pridi Banomyong and ending with Prayut Chan-o-cha.

To say he was widely loved is to underestimate the depth of feeling that was held by so many Thais – and the extent to which the Thai royal family is part of Thai life. 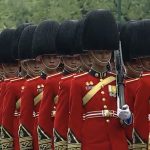 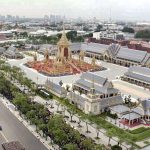 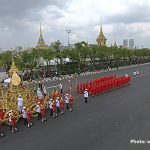 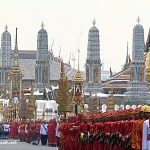 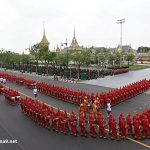 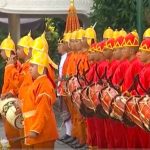 This deep love has been constantly reinforced through the education system and the nation’s media. The King’s apparent humility made him appear one of the people, while also being near-divine.

It is remarkable the extent to which this one man was the heart and soul of his nation. A nation’s moral compass. His popularity was undimmed, and maybe even enhanced, throughout the tumultuous cycles of coups, uprisings and crackdowns.

The King gave the nation its cohesion; the one part of life that united almost all Thais. The monarchy’s revival (to a near exalted position) from an uncertain future after the Second World War was arguably the central achievement of his reign

“For the collective national psyche, this is the end of an epoch — a time when Thais had unity, consensus, common goals and a king who was the central pillar of a political order that kept us away from communism and enabled us to have economic development for several decades,” says Thitinan Pongsudhirak, a professor of political science at Bangkok’s Chulalongkorn University.

Of course royal criticism is dealt with harshly in Thailand; but I suspect the criticism that exists is more about the institution and its role rather than of the late King himself.

The cremation ceremonies take five days although today (26th October) is the most significant with events that have been planned and rehearsed down to the final detail. 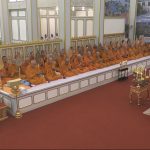 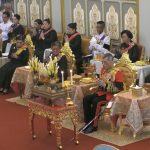 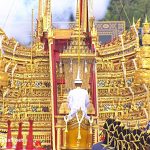 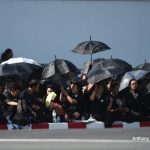 The ceremonies centre upon Sanam Luang adjacent to the Grand Palace in Bangkok. For much of its history people have used the ground as a park, flying the kites that became associated with the field. But Sanam Luang also has an official English name that retains its true meaning: the Royal Cremation Ground.

Today’s day of remembrance will include six processions and the late king will be laid to rest at the end of the day. Performances will continue throughout the night, including Khon masked drama, traditional puppet shows and orchestral performances.

In Buddhist tradition, the cremation is a final farewell to the dead. For many Thais, the flames that are to ignite at 10pm symbolize the true end of his reign.

By tradition the body of the King was actually moved in its coffin to the cremation site last night.

However the traditional royal urn was transported at midday today in a slow-moving two hour procession to the Sanam Luang site.

For the public and media at the ceremony a strict dress code and prohibition of any colorful items has been imposed. An army of volunteers and security forces are spread around the site to look for any inappropriate behavior. Their are restrictions on the type and use of cameras. TV pictures are using a shared feed.

Walking in the processions are members of the royal family offering the mourners a rare glimpse. A granddaughter of King Bhumibol herself is leading the cavalry corps on horseback.

Per Buddhist tradition, a symbolic version of the cremation takes place at 5pm attended by international royalty and dignitaries. The actual cremation will take place at 10pm.

The Queen was not present.

Throughout the day, mourners will be allowed to lay farewell offerings of sandalwood flowers at the pyre. The papers are folded to resemble daffodils, reportedly the king’s favorite flower when he was in Switzerland.

The mourners at Sanam Luang are dedicated. Most have been camping for days, huddling from rain storms and searing sunshine. Some were admitted to Sanam Luang; many are in the surrounding streets.

Jonathan head reported for the BBC from among the crowds – they were tired, sad, yet sharing food and stories among old and new friends. The ceremonies were some 200 yards away. They could be heard but were not visible. People wanted to be there or at other crematorium replicas across Bangkok and nationwide. 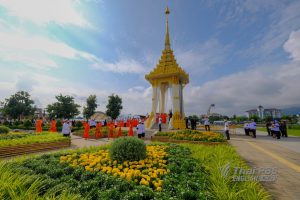 When the performances end tomorrow the a year of mourning will officially be over, and Thailand will begin a new and uncertain chapter in its history.

No date has yet been set for the coronation of Maha Vajiralongkorn, King Bhumibol’s heir. However, Thais have speculated that this could come early next year, perhaps as soon as January.