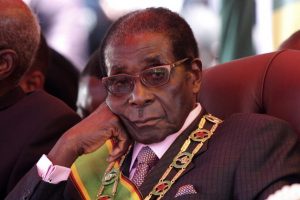 The trouble with dictators is that they always want to hang on too long.

In the case of Robert Mugabe, for far too long.

They also want to secure a succession – to pass the spoils of dictatorship onto family or another who could secure their legacy.

Usually someone steps in first. Sometimes the people. Often the army.

In Zimbabwe this week it was the army.

Robert Mugabe wanted his wife, Grace, to take over from him as president of Zimbabwe. Grace Mugabe’s only qualification for high office was her marriage to Mr Mugabe, a man 41 years her senior with whom she began an affair while his first wife was dying.

Her ambitions were thwarted this week when the army seized power, insisting that this was not a coup while making it perfectly clear that it was.

Mr Mugabe has misruled Zimbabwe for 37 years. He appears to be unharmed and attended a university graduation on Friday.

But he has finally lost control of the country he ruined. He should never have ruled for so long.

The beginning was hopeful. Mr Mugabe fought against white rule in the 1970s, in what was then called Rhodesia, and legitimately won an election in 1980.

With international aid and good harvests, the new country of Zimbabwe prospered for a while.

But like so many revolutionaries, Mr Mugabe could not tolerate any challenge to his rule. Violence was a tool to stay in power.

Despite the nation’s farming lands and mineral deposits after nearly four decades of Mr Mugabe, Zimbabweans are on average a fifth poorer. This year a quarter of the population were short of food; perhaps 3m-5m out of 17m have emigrated in despair; many to South Africa.

The coup may not change much. Coups are never legal and usually spread misery. The generals and ruling-party old guard who engineered this one are not reformers; they are part of the grubby system Mr Mugabe created.

Many have profited handsomely under Mugabe. They intervened this week not out of principle but to stop Mrs Mugabe and her younger supporters from taking their places at the trough.

How often is that the real motive of a coup. Hello Thailand.

Emmerson Mnangagwa, the 75-year-old man who may end up in charge, is a longtime Mugabe loyalist. He was security minister during the Ndebele massacres; during an election campaign in 2000 his supporters burned his opponent’s home down.

But; an election is due to be held by the middle of next year. How that will happen and how free and fair it can be may depend upon outside influences such as China and South Africa.

If there is a free, fair vote now then Mugabe’s successor would start out with real legitimacy.

The Mugabe family have a home in Dubai; they are likely to join other ex-leaders living there.