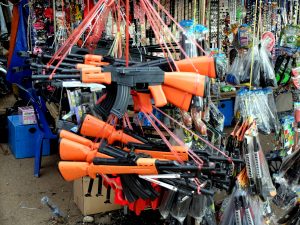 This is different from Dubai – in Dubai the sounds are of 24/7 construction, overlaid with the 3am honking of drivers leaving the nightclubs…

This is more a way of life.

For instance every shopping mall in Thailand has some sort of product display with Thai women shouting a script into their microphone. Often there may be more than one display so this becomes an exercise in competitive screaming.

Add to that the music that must be played in between speeches and you can understand how much fun this is not.

The BTS in Bangkok has endless advertising on tv screens inside the carriage – there is no escape. The same on the station platforms.

You go to the electronics section at your peril.

It is not that much better in the country,.

Neighbours start up their car or motorbike. They do not drive away. They run the engine for minutes until they are ready to leave.

Loudspeaker noise from outdoor festivals can often be heard. Temples, yes you read that right, are often the worst offenders. They are often the centre of a community and that is where the big events in the village are held.

Neighbors. A house opposite us ended its rooftop party around 3.30am the other day. They simply do not appear to think that they may be causing a disturbance. Or if they do think they do not care. It was clear that they were either unaware or unconcerned that their noise may adversely affect others nearby.

Whistles. Give a Thai man a whistle and he is a god. Obey me.

Do the authorities care? Hard to tell. Thailand relies on tourism to supply a major portion of its revenue. Offensive noise annoys some tourists; but many become a part of the problem.

More importantly noise pollution lessens the quality of life for Thais. But they may be too used to it to care. And they never want confrontation.

In serious situations I have been told to call the police – it does seem a level of escalation that may gain more enemies than friends.

Thai people simply appear to grin and bear it. Its Ok they don’t do it often is something that I have been told.

No Thai person will complain directly to the noise maker. This is very Asian. Face matters.

And it is hard for a foreigner to complain. Even these who speak Thai may not have mastered the nuances of complaining politely enough to avoid antagonising the offender. And that can be a real issue in Thailand. Rage lies just under that smile.

So what to do….suffer in silence. If only there was silence to suffer in.