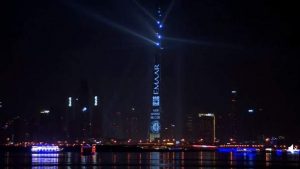 Back on 1 January I wrote about my concerns in respect of the world record claimed by Emaar for their Burj Khalifa NYE light show.

Those comments are here.

I also left an enquiry with the Guinness World Records team and after chasing for a response I received this reply yesterday: there are issues here that warrant some additional comments. My view that this is a very dubious record are unchanged.

I wish you a happy 2018 and my apologies for the delay in getting back to you.

To address your concerns about the record achieved during New Year’s Eve celebrations, I would like to clarify the details of the record that was achieved by Emaar.

The record was for the Largest light and sound show on a single building. For this record, any types of lights (laser, LED, etc.) could be used in addition to different techniques (e.g. projection mapping) to qualify. However, since it is open for all these varieties, it is not necessary for all the facades to have same display or have a full LED screen covering it. The main purpose is to create a theatrical light display along with the sound show. We have the video evidence of the entire building lit up from different angles but due to confidentiality I cannot share these. Therefore the matter in question here is a matter of quality and unfortunately there isn’t a way to impartially and subjectively measure that.

The light show part of the record wouldn’t have qualified if Emaar was attempting the record for the largest LED illuminated façade. This record will require the entire surface to be covered with LED lights to form a single screen display. Emaar has broken this record in 2014 NYE but they didn’t qualify for it this year.

From the above, the LED façade and the light and sound show fall under two different categories and if the attempt in question was for the LED illuminated façade Emaar wouldn’t have qualified. I would like to assure you that Guinness World Records will always verify attempts fairly and equally amongst all challengers around the world and we don’t grant records if they don’t meet our guidelines.

To conclude this email, we, at Guinness World Records, highly appreciate your passion and we are proud to have advocates such as yourself because we all stand by the fairness, equality and integrity of our word.

I will be more than happy to answer any further questions you might have. Please feel free to contact me if you need any further clarifications.