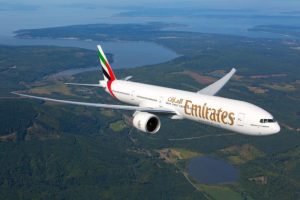 Emirates will fly 5 times a week from Dubai to Santiago International Airport (SCL), via the Brazilian city of Sao Paulo, starting on July 5, 2018.

The new service will see Emirates fly an additional five times a week to Sao Paulo, complementing the airline’s existing daily A380 flight between Dubai and Sao Paulo.

Emirates’ Santiago flight will be a linked service with Sao Paulo, meaning that customers in South America can now travel between the two cities in unprecedented style and comfort. Citizens from both Brazil and Chile only need ID cards to travel to either country.

The new route will be operated with a two-class configured Boeing 777-200LR.

Flight EK263 will depart Dubai on Tuesdays, Thursdays, Fridays, Saturday and Sundays at 09:05hrs local time, arriving in Sao Paulo at 17:00, before departing again at 18:30 and arriving into Santiago at 21:40 on the same day.

Santiago, the first destination in Chile to be served by Emirates, is the largest city of Chile accounting for nearly half of the nation’s GDP. Chile’s capital is developing its reputation for being an incubator for major universities, large global companies and budding start-ups thanks to a growing population of well-educated young professionals.