Home→Aviation→Chiang Mai airport upgrades – believe it when it happens 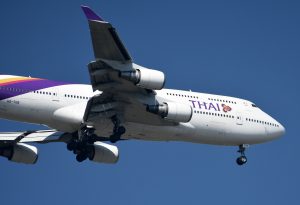 Squadron Leader Monthanik Rakngam, the General Manager of Chiang Mai International Airport and team made an announcement on February 28th on a new project to increase the airport’s capacity due to the dramatic increase of the passengers over the past years.

Over 15 billion baht will be invested to build a new four storey passenger building which will be linked with the current one and a multistorey car park that can hold 5,000 cars.

The investment will increase the capacity of the airport to 20 million passengers per year.

No date, or timetable, was announced for this work.

It probably also ends speculation about a new Chiang Mai airport – at least for the foreseeable future.

The problems remain. The airport is too close to the city so noise pollution is a major issue that will be worse with a doubling of capacity. The Thai AIr Force own the airport and will not want to give up this revenue generator. Though the AoT is clearly of the opinion that Chiang ai needs a new greenfield site airport.

And by the time that the new terminal is ready the airport will already be operating at or close to the new capacity.

Some improvements will be carried out starting this April which will include upgrades on signs and facilities, increase in space and more employees. None of that will help deal with the appalling car parking and the chronic overcrowding.

Squadron Leaders should fly airplanes. They should not be running international civilian airfields.