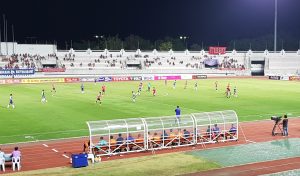 The vast concrete cavern of the 700th Anniversary stadium in Chiang Mai is the home ground of both of the city’s professional football teams. Chiang Mai FC and Chiang Mai United.

The 25,000 capacity stadium was built for the 1995 Southeast Asian Games and to commemorate the 700th Anniversary of Chiang Mai’s establishment at the same time.

Only the main stand has plastic seats and a cover. The rest of stadium is uncovered concrete steps painted white.

As a football stadium it is a bit of a disaster since the running track and other facilities keep spectators a long way from the action.

It is also a rather dilapidated space. Maybe that is part of the charm. The lights are good. The pitch is green; a bit bumpy in places despite heavy watering.

Chiang Mai FC, in the second tier of the Thai league, now play in red to satisfy their main sponsor, Leo. Since 2015 the ruling junta has ruled that alcohol logos – or even images accepted as representative of brands, such as a deer head for Benmore or red stars for Heineken – are not allowed to be displayed in sponsorship or any kind of advertising or promotion.

There are other onerous laws about product placements and advertising. So Leo, Chang and others announce that they are promoting soda water.

That amber liquid for sale outside the stadium was not coloured soda water.

The logo on the team shirt; that is not going to make me buy soda water!

The crowd last night – just 656. In a city of over one million people and in a country that loves its football the club really should be better supported than that. 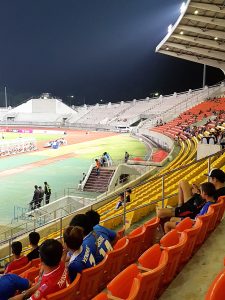 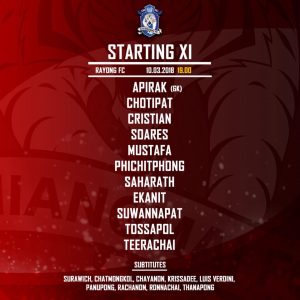 Chiang Mai FC had drawn 2 and lost 2 of their first four league games this season. A win was badly needed.

It was done in some style. Playing 3-5-2 Chiang Mai were solid at the back; in control of midfield and had some pace up front.

They led 1-0 at half time after a sweeping move started in midfield by club captain, Pichitphong and a low cross from Afghanistan international, Mustafa Azadzoy, swept home by the tall Brazilian, Cristian Alex, his first goal for Chiang Mai, following a transfer from Japanese side Gifu.

Rayong offered little up front; a few hopeful crosses confidently gathered by Apirak in the Chiang Mai goal. Otherwise he did not have a save to make throughout the game.

A scrappy start to the second half was lit up in 67 minutes with a terrific run and finish from Azadzoy.

Chiang Mai’s third was a curled 20 year free kick from Pichitphong; his last kick before being substituted. Pichitphong is 35; capped 73 times by Thailand in a long career, he is good for maybe 60 or 70 minutes and his ability and influence are clear.

Azadzoy and Alex (until he was substituted) were both prominent. My man of the match, however, was the defender, Thossapol, wearing 6, and playing almost as an old fashioned sweeper. He read the game well; made good decisions; and kept his defending simple and safe. The sort of defender that a goalkeeper likes to be behind.

So a good win and an entertaining night out. There were plenty of foreigners and families in the crowd. Sadly all the announcements are in Thai and there is no program or even a teamsheet.

But there is a small group of cheering and drumming fans – Thai and foreigners; lots of energy, flags waving and chanting songs for 90 minutes to the beat of large marching drums. Hats of to them; they create an atmosphere!

The next home game is on 1 April. Be there!