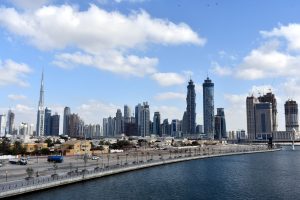 İyad el-Baghdadi | إياد البغدادي @iyad_elbaghdadi was expelled from the UAE. He is a writer, entrepreneur, and human rights activist who attained international prominence during the Arab Spring.

A self-styled “Islamic libertarian,” he is an outspoken critic of both Islamic movements and secular dictatorships, and has set himself apart from many other activists through his use of twitter to convey his views on events in the Gulf region.

A stateless Palestinian who was born in Kuwait and raised in the United Arab Emirates, he is now a political refugee in Norway.

I like him – he puts principle before partisanship. He may or may not be right – but his opinions and analysis are well argued.

So when he writes about the UAE’s involvement in the 2016 US election campaign and in the recent removal of Rex Tillerson as secretary of state, like most of his tweet threads, it is worth a read.

These were posted on 14/15 March this year:
“I believe UAE/KSA have been a strong impetus behind Tillerson’s firing. Here starts a long thread about the *other* meddling scandal into US politics:

Everyone has been looking at Russian meddling into US politics, but another couple regimes have been meddling since before Trump’s election. The UAE’s and Saudi Arabia’s.

A few days ago we learned that Erik Prince – Trump supporter and founder of Blackwater – is a subject of Mueller’s investigation. Prince also just *happens* to be friendly with the UAE’s Mohamed bin Zayed (MBZ), who’s been using Blackwater for years.

Incidentally, Saudi Arabia’s Mohammad bin Salman (MBS) has been employing Blackwater too, though unconfirmed leaks (in Arabic) last week suggest he asked them to leave when he found they were cooperating with US investigators.

In January 2017, Erik Prince attended a secret meeting in Seychelles to establish a back channel between Trump & Russia. That meeting was organised by the UAE; leaks say additional UAE-linked parties were there including intelligence officials.
washingtonpost.com/world/national…

Why was the UAE helping establish a Trump-Russia back-channel? I had thought they wanted to win favor with Trump after he won, but turns out it goes way further back – they were illegally funneled funds into Trump’s campaign in 2016.
foxnews.com/politics/2018/…

Lemme make that clear again. The UAE government funneled millions into Trump’s election campaign when he was still candidate Trump. This is *illegal* in the US.

“But wait, why establish a back-channel to Russia? Doesn’t that clear Trump?” – not really, the Russians had to get him into the White House, but now wanted priority access to him to get him to do what they wanted (most probably, sanctions relief)

For more about the Magnitsky sanctions against Russia and why it has the Russian elite screaming, read the following. The Magnitsky act has been one of the most effective measures taken against the Putin regime.
theatlantic.com/international/…

Also, UAE’s MBZ came to the US on Dec 15, while Obama was still president, and visited Trump without telling Obama – suspicious as hell and against protocol. Flynn, Bannon, George Nader and Yousef Al Otaiba (UAE ambassador to US) were also there.
nydailynews.com/news/national/…

Right after Trump’s inauguration – February 2017 – Yousef Al Otaiba (UAE ambassador to the US) was “in constant phone & email contact with Kushner”. There was very intense lobbying going on and we’re about to see why.
politico.com/magazine/story…

In fact, when Trump’s first attempted Muslim Ban came (February 2017) the UAE – a Muslim government – made sure to support Trump, saying that his Muslim Ban wasn’t anti-Muslim (!):

Trump’s first-ever foreign trip was to Riyadh, May 2017. That’s when MBZ, Sisi etc flocked him like hyenas, with that ominous globe photo etc. “This is our guy” and we gotta get use him as a blunt instrument against our enemies (Iran & Qatar, basically).
nytimes.com/2017/05/22/wor…

Let me say it this way – these Arab tyrants thought they were getting another GW Bush (a *golden* president for them, the war on terror extended their hold on power for 15-20 years). They were absolutely *ecstatic* about a repeat, with Trump, especially that he’s so corruptible.

Thickening the plot, it seems that Jared Kushner approached Qatar for money to bail out a Trump business in April 2017, shortly before the Qatar crisis. They turned it down, and the Qatar crisis came a month later. twitter.com/jaketapper/sta…

Basically it looks like while the UAE & Saudi Arabia were intensely lobbying Trump against Qatar, Trump pulled this move and tried to get money from Qatar – when Qatar turned him down, stage was set.

Right after Trump left Riyadh (late May 2017) came a hack of Qatar’s news agency, planting fake news which UAE/Saudi used as pretext for the Qatar crisis. CIA said it was the work of Russian hackers paid by the UAE:
washingtonpost.com/world/national…

The Qatar crisis came a week later (early June 2017); this is when we saw a lot of confusion in US messaging, with Trump saying something and Tillerson something else. This is when Trump’s tweets did this:
independent.co.uk/news/world/ame…

There has been speculation that a UAE/KSA military invasion of Qatar was on the agenda at one point – which was preempted when Qatar invited Turkish troops. They basically wanted to use Trump as a brute instrument for a coup/war. Trump effect in action.
middleeasteye.net/news/uae-plann…

Around the same time, you saw the complete bastardization of UAE-based news outlets including Sky News, Al Arabiya etc, to act as basically mouthpieces of the UAE government for the crisis.

In October 2017, it was revealed that UAE lobbyists were trying get Rex Tillerson fired because he wanted to de-escalate the Qatar crisis (they wanted more escalation). independent.co.uk/news/world/mid…

…After intense diplomacy, it was revealed last month that the leaders of Saudi Arabia, the UAE, and Qatar were to visit Trump. People were speculating that the US will use its influence to de-escalate the crisis.
reuters.com/article/us-usa…

Let me put it this way – Tillerson was fired a mere *six days* before Saudi’s Mohammad bin Salman (MBS) is to visit Trump: reuters.com/article/us-sau…

Everyone thinks Tillerson’s firing is about Russia, and it may be – but I don’t think that’s the full story. This is a master stroke for the UAE & Saudi Arabia – and at a very convenient time.

Look at the *other* instance of meddling into American politics – the tar kingdom of the Gulf. And look at the *other* Trump effect – enablement of destructive, destabilizing dictators who use his stupidity and corruptibility to get what they want – and cause more instability.

Why do I call it *meddling*/interference and not just “lobbying” – parts of this were illegal, parts very shady, and parts involving corruption. This isn’t just lobbying.

Aaaaand there it is. I rest my case. twitter.com/turaani/status…

Khalid M. Turaani @turaani
Dr. Abdulkhaleq Abdulla, a UAE political science academician brags that #UAE was behind #Tillerson ouster. Hay Doc, FYI, there is an ongoing #FBI investigation into foriegn countries meddling in US affairs, are you implicating MBZ ?! I bet he’ll deleted it soon. @BobSMueller

Just to translate @Abdulkhaleq_UAE’s tweet: “History will remember that a small Gulf country managed to remove the state secretary of a superpower”. They’re practically gloating.

Joseph Bahout باحوط @jobahout
A #UAE academic, quite well-followed, brags about his government’s active role in #US #SecretaryOfState #RexTillerson from office.
Cf. my #PT thread.

Hassan Hassan حَسَنْ @hxhassan
“History will record that a GCC country had a role in the sacking of the foreign minister of a great power, and this is only the beginning of more”

If it was at all possible it seems that I missed a few angles yesterday. There’s also some parts that weren’t detailed enough for readers lacking Middle East context. So here’s a few more additions:

First of all I need to emphasize that when the Qatar blockade/crisis started, there was very confused/mixed messaging from the US. Trump sided with UAE/Saudi Arabia, while the US State Department (Tillerson) was urging caution and de-escalation.

Reminder: By early June the Emaratis and Saudis had Trump on their side and were in his ear long enough to get him – if not to side with them (although he did make anti-Qatar statements) – then to step aside and let them do whatever they wanted to do.

Here are three different articles about just how confused the US administration was on this (Tillerson trying to de-escalate, Trump undercutting him) – and how pissed Tillerson was: theamericanconservative.com/larison/tiller… nymag.com/daily/intellig… straitstimes.com/world/united-s…

When Trump visited Riyadh in May, and when the Qatar crisis started in early June, Mohammad bin Salman (MBS) was the deputy crown prince. Within the same month MBS managed to get the crown prince deposed to become the crown prince himself. theguardian.com/world/2017/jun…

In July, Tillerson flew to the region to try to defuse the crisis and again it didn’t work. UAE/Saudi leaders were frustrated that he was even trying, that’s not what they were interested in. theguardian.com/world/2017/jul…

Now, in November 2017, Gulf lobbyists in the US started talking about Tillerson getting fired. This tweet is from 12 November 2017. twitter.com/moaidmahjoub/s…

And then the rest. And oh, you know how UAE-linked accounts yesterday was gloating? The same dude tweeted this. “Tillerson: Worst secretary of state ever” twitter.com/jobahout/statu…

There’s a lot to unpack and there will be a lot to comment further on, but this thread is already too long. Thanks for all your comments guys.”