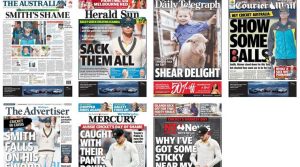 Australia captain Steve Smith and vice-captain David Warner have been banned by Cricket Australia for a year for ball-tampering. They had been given just a one match ban by the ICC.

Cameron Bancroft, who carried out the cheating in South Africa, was given a nine-month ban.

Smith and Bancroft have also been suspended from captaining Australia for at least the next two years.

Warner will not be considered for “any team leadership positions in the future”, Cricket Australia said.

The ban applies to all Australian cricket except for local club matches.

Smith and Warner have both lost their IPL 2018 contracts. All three and losing valuable endorsement/sponsors agreements.

So that is the punishment. And it is severe. How did we get here?

On Sunday 25 March 2018, Australians all over the country woke to some shocking news. Australia had cheated at cricket.

They had committed what the ICC regard as a minor misdemeanour. Ball-tampering.

The problem was threefold; they got caught; it was premeditated and they were not honest about it afterwards.

Yet the rest of the world simply shrugged and thought naughty boys; a one game suspension, a match fine and lets get on with it.

Gleefully the Sky New Zealand TV commentators went into some detail on how cricketers have been attempting to alter the performance of the cricket ball for years – from saliva fuelled by sweets and chewing gum, using sand in a pocket to scuff the ball, using sunscreen or lip balm to add shine – or best of all – the small strip of sandpaper that was stuck onto, and matched the colour of, the wicket-keeper’s gloves.

So the rest of the world simply shrugged and thought “no surprise; silly boys.”

Yet Australians were inexplicably but genuinely surprised. Here is an email to me from a wise Aussie friend (who appears to have had something of a crystal ball in his hand when he wrote this):

“Just for the record there is anything between outrage to disappointment across Australia from the PM down to the man on the street. If CA doesn’t sack Smith as captain and as a player, I think the Aus public will want blood.

How Smith could sit there and say he thought he was still the best person to lead the team is laughable. If he stays (and Warner), the message it sends to young up and coming players and to the international sporting world about how Aus plays sport would be a catastrophe. Smith at least has to go to show the world that the rest of this country is also “unhappy”.”

Front pages were stopped for the story in what passes for the Australian media. Prime Minister Turnbull looked almost in tears as he explained the shock to the nation. This by the way is a country that send a rebel team (twice) to apartheid South Africa under Kim Hughes (yes I know the English were just as shameful); that invented metal bats and which thought it was ok to win a match by bowling underarm.

The public outcry – from cricket commentators to the Aussie media has been near vitriolic. Yet does anyone really think that the Australian cricket team is a place of noble purity or that there have not been previous, unseen, attempts at ball tampering.

“Aussie Cheating Scandal – SHAME” – read The Daily Telegraph, “Smith’s Shame” – read The Australian. Elsewhere – “Caught With Their Pants Down” – read The Mercury while The Advertiser read – “Smith Falls on his Sword”. ”

“Sack them all”, wrote The Herald Sun. “It’s just not cricket, but have we gone too far?”- The Chronicle said in a piece. In another, The Canberra Times wrote – “For Australian cricket, arrogance rewarded just led to more arrogance.”

The Sydney Morning Herald slammed the Australian cricket team’s leadership saying it had “lost the plot” and there will be a heavy price to pay.

Inevitably the politicians became involved. People who are notorious for being fine upstanding men and women. Cough!

Then the sponsors started to get upset – who knew as Cricket 365 noted that “LG had “core brand values” that extended beyond “make some televisions” and also included “don’t rub sandpaper on cricket balls””.

Caught unprepared and without knowing the extent of the evidence it was almost inevitable that Captain Smith and his team would try to defuse the situation with an ill thought out, half-true confession after play. Smith said that he and his team would learn from this and move on. He had no idea what was waiting for him.

What Warner, Smith and Bancroft did was unacceptable. They are all guilty and to their credit they have (after a while) all put their hands up.

The reaction outside Australia is far less damning. We already knew that Warner, Smith and Bancroft, however talented, were also due no sympathy based upon past behaviour.

Warner’s reputation has been earned over years. He may be the the most obnoxious personality in cricket. And he appears to have lost the support of his teammates.

Bancroft spent the afterglow of his Test debut attempting to humiliate a fellow professional, Bairstow, while Smith snickered alongside him.

At the heart of the team was a culture that had become toxic. Cricket365 writes that “nobody within the board or in the country at large seemed to notice or care. Warner’s antics were tolerated or even encouraged. Smith’s mountainous pile of runs obscured from view his own descent into dickishness.”

Australia’s coach Darren Lehmann was initially exonerated by Cricket Australia; but he has been at the heart of the team for five years. He must have understood what was happening. Given the punishments to his three players Lehmann has now done the right thing and resigned.

The officially sanctioned ICC punishments for ball-tampering are minimal. But here a nation felt let down. The Sandpaper Three would face greater punishment.

They have not just been punished; they have been humiliated. If they could still be tarred and feathered they would be.

There are pictures of Steve Smith hurried through airports surrounded by police and jeered like an actual criminal.

Let’s be honest. The Australian image embraced by its cricket team is macho bravado. Masters of sledging – at least of handing it out. Expecting to intimidate and to win.

Cricket Australia is trying to protect an image of Australian cricket that the rest of the world knows does not exist.

All the evidence suggests that this was a Warner plan – and he used, and even, coached the youngest of the team to carry out the plan.

Smith may have known nothing about it. Yet as captain he said it happened on his watch and that he is responsible. Credit to the bloke. Sadly it will now be a year before we see Australia’s best batsman since Bradman and that is a loss to cricket supporters everywhere.

The nation’s response; the media reaction; the over-reach of Cricket Australia reeks of a pious pretence of moral superiority.

It should stop. The players should be reinstated for the next scheduled test series after South Africa….maybe without Mr. Warner, who may not play for Australia again; though I suspect he will make a very nice living on the global 20/20 circuit.