Home→Sport→A new low for the season 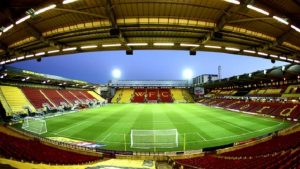 Watching Watford this season is painful. It was last season. And that is the trouble. We are not progressing as a club. We are is survival mode.

But when we got the manager we wanted at the start of the campaign all was looking rosy. Richarlison was creating. Doucoure was scoring for fun. Cleverley looked sound in front of a back three or four. Gomes, mostly, looked confident.

Then Marco Silva decided after some nine games with Watford that he would prefer to be at Everton….and he told a number of players that they would be going with him.

After weeks of uncertainty Silva is fired.

Javi Gracia takes over at the end of January. There is the usual new manager bounce. And then we start to look even worse than we did before he arrived. Huddersfield away was a new low. We looked completely bereft of ideas. The substitutions were disastrous. Deeney is lost on his own up front. Outr passing was woeful. And we lost 0-1 to a 92nd minute goal and Huddersfield’s only effort on target of the whole game.  Worse we have lost twice to them this season.

This quote is from the Guardian’s match report:

“Watford were worse. Theoretically Javi Gracia’s men are not out of the relegation woods themselves but they started here as if convinced they were already safe in practical terms. A ridiculous five-minute spell from Roberto Pereyra summed up most of the first half. In the 27th minute he took their first corner and hit it straight out of play. Ninety seconds later he did exactly the same thing. And soon after that he was booked for diving.”

We fail miserably to hold onto games where we lead and should win. Here are some notes on games we have thrown away this season. The notes are from some comments on twitter but have had to be tidied up to remove some industrial language.

Chelsea 4-2 Watford ; 2-1 up, cruising, Richarlison misses two open goals, manager then proceeds to bring on Ben Watson for a bit of energy in the midfield, concede 3 in 15 mins.

Watford 1-2 Swansea ; This was awful. We take the lead early doors through Andre Carrillo (basically his one contribution of the season) and are cruising, sound familiar? 86th minute, gbp18.5 million striker Andre Gray is one on one with the goalkeeper and he misses. Swansea were bottom of the league,and four mins later it’s 2-1 to Swansea.

Watford 2-2 Bournemouth ; Been a while since our last bottle, hope is restored amongst some fans. 2-1 up 93rd minute, Okaka elbows someone, free kick in the Bournemouth penalty area, lobbed forward, header on and Jermain Defoe scores. He is so small maybe no one saw him come on as substitute.

Huddersfield 1-0 Watford ; Dull game, Huddersfield haven’t had a shot on target until we decide to give the ball away in midfield for the nth time in the half. One chance. Ince taps home.

So what next – four games to go, Crystal Palace and Newcastle at home and away to Spurs and Manchester United.

Palace are a bogey team – Zaha will run circles around our defense. If Holebas returns cards are likely. Our best bet for three more points is Newcastle.

We have taken just one point from the last 15 available. 37 points may still be enough to stay up. But we do not deserve to. How we are still 12th is a mystery.

What next – bring back Gomes for the confidence that he offers, his ability to organise his defense and for his distribution. Play two up front from the start. Never put Capoue in a Watford shirt again. Start Richarlison for Pereyra whose confidence and pace have gone. Maybe a summer off will do him good. Where is Zeegelaar?

Though Richarlison and Doucoure both know they will be gone in the summer – and their performances reflect that.

As for next season. Gracia will not take Watford forward. He will be gone. So will Richarlison and Doucoure for decent fees. Others to leave should include Gray (awful signing), Deeney (too much influence for too little return), Okaka, Capoue, Sinclair, Karnezis, Britos, Holebas (liability) and Carrillo (lightweight).

If fit there are some decent defenders among Cathcart, Kabasele, Kaboul, Mariappa and maybe Janmaat.

There is the makings of a decent midfield in Deulofeu, Chalobah, Femenia, Hughes and Pereyra. Keeping Hughes may be challenging.

But that is about it. There is a squad to rebuild.