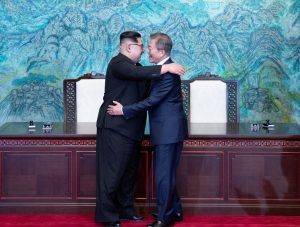 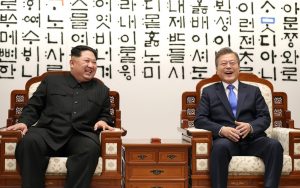 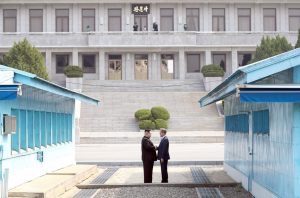 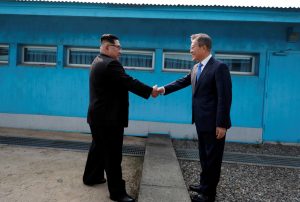 It was the first meeting between the leaders of the two Korean nations for eleven years.

It was the first time that a North Korean leader stepped into the South.

The meeting on Friday between Kim Jong-un and President Moon Jae-In was big on symbolism respecting both nations as equals.

The two leaders promised to bring “lasting peace” to the peninsula with a commitment to denuclearisation and to ending decades of hostilities.

Speaking at the end of an extraordinary day that began with a lingering handshake across the demarcation line separating their countries, the joint statement was short on detail but offered cause for optimism as the world looks ahead to a summit between Kim and Donald Trump sometime in the next month.

And that in itself would be a huge concession by the Americans. North Korea gets a seat at the big table as a peer.

In some respects it was a slightly curious meeting – a smiling father meeting the son he gave up for adoption many years ago – and now trying to help him take baby steps in the new world without seeming to patronise him.

A great deal of groundwork will have been done by their respective staffs in advance. But while Moon looked relaxed and confident; Kim looked like a young man who was happy to have a guiding hand.

That said Kim knows he is now able to negotiate from a position of power. North Korea is a proven nuclear nation. As such it can come to the table with a strong position to make demands. But it is also a nation whose economy is in a desperate plight from sanctions, lack of funding and no access to international markets. Kim wants to be the leader that brings prosperity and international respect to his nation.

Many in the USA gave President Trump the credit for bringing the two side together.

Jonathan Cheng at the WSJ tweeted:

Mike Pence: “The fact that N. Korea has come to the table without the U.S. making any concessions speaks to the strength of President Trump’s leadership and is a clear sign that the intense pressure of sanctions is working.”

In a series of tweets he laid out the following thoughts which make a whole lot of sense:

There’s no actual evidence that Trumpian belligerence led to this, only a strong desire of Trump defenders to claim a ‘win.’

POTUS agreed to meet the world’s worst human rights abuser in exchange for nothing, which experts in this area counseled against for decades. Let’s all cringe at the coming photos of the leader of the free world yukking it up w/ an orwelian gangster.

US pressure is filtered through China through which NK’s trade and finance flow. So if Trump pressure worked, then be sure to thank China a lot. (Trump does deserve credit for pushing China a lot on NK.)

US analysts,& politicians especially, constantly overrate how much others’ choices are driven by what we do. Our hegemony goes to our head. NK has a long record of doing whatever the hell it wants regardless of global opinion, so our default position should be that NK does what it does for internal reasons firstly. Not that it ignores international opinion, just that we should be cautious about ascribing foreign causation to an opaque regime we don’t understand well.

So my sense is that Kim is bargaining primarily because he had the ability to nuke CONUS, so he can approach us from a position of strength. Now that nuclear deterrence with the US is assured – ie, now that the US will never launch an Iraq-style regime change war against NK, bc we don’t want them to nuke the US homeland in retaliation – they are safe to come and look for a deal.

Basically, they’re going shopping. So they’ll talk to anyone now – Moon, Trump, Abe, Xi, Putin, even the IOC. Why not? See what you can get for it. How can they cash out this hugely awesome capability?

Naturally Trump thinks this about him, but it’s not. Kim’s meeting with everyone now. And if no deal is forthcoming, then they just return to their defensive crouch and wait for the storm to blow over and everyone adjusts to a NK with nuclear weapons.

We adjusted to Cultural Revolution China with nukes.

We adjusted to Pakistan with nukes. Remember how everyone freaked out when Pakistan got nukes? A weak state wracked by Islamic fundamentalism? Despite the dire predictions, nothing happened, and in time everyone got exhausted and just gave up and adapted.

I’d bet that’s NK’s model for the future: get a sweet deal or dig in and hold till the rest
of us tire, get bored, get distracted, get bewitched by the latest Trump scandal, and gradually gets accepted as a de facto nuclear state. Yes, it will take longer, bc it’s NK, which is uniquely scary, but I’d guess we’ll adapt.

ADDENDUM: Some readers have brought up that SoKo’s ForMin credited Trump for bring NoKo to the table: Ok. Perhaps. It’s possible. But she doesn’t really know either. A far more obvious explanation is that she is flattering Trump.

Diplomats and leaders around the world have learned pretty quickly that the best way to keep on Trump’s good side and avoid tariffs and US harping, is to flatter the president. Look at Abe. He’s a master at that. The South Koreans were terrified last year that Trump was going to start a war.

If flattering this affirmation-craving president is a way to avoid a national catastrophe that is good politics. END

But in the end maybe it does not matter how they got to the negotiating table. If North Korea and South Korea can convert their truce into a lasting peace and bring de-nuclearize the Korean peninsular then the world is a better and safer place.

The winners will be the Korean people. And that would be very good news.