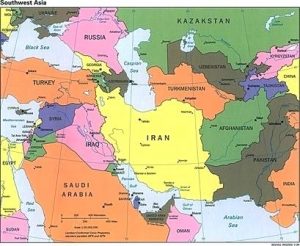 How close are we to a major war in the Middle East – that could drag in allies from Russia, the USA and the west?

This will not be a domestic war; this is not contained like Yemen, Syria or even Libya,

This would be a deadly high-tech war using satellites, nerve gas, cluster bombs and long-range weaponry. A war where at least one side is in possession of nuclear warheads.

There has been an escalation in recent months across the Middle East; the news makes this look like part of a never-changing regional chaos by the news bulletins.

But there are those on both sides that want a larger war – a battle for the hearts and minds of the region.

In July 2017 a new leadership took control of Saudi Arabia, more clearly aligned with the US on anti-terrorism and more belligerent towards Iran.

In Syria, the Assad regime is moving towards endgame in its war with the rebel forces, bringing US forces (and British special forces) into friction with Russian, Iranian and Iranian-backed militias

Russia has doubled down in its defence of Assad, even after he likely used chemical weapons in Douma, rounding up witnesses to refute the USA’s evidence.

The US, Britain and France launched a large, unilateral missile strike against Syria on 14 April, in which the Russian air defence units in Syria declined to defend the targets.

Donald Trump is preparing to scrap the Joint Comprehensive Plan of Action deal (JCPOA), in which Iran promised to end its nuclear weapons programme in return for the lifting of some sanctions. This is despite significant European pressure to maintain the Iran nuclear pact.

Trump’s tapping of Mike Pompeo and John Bolton for secretary of state and national security adviser, respectively, should do away with any pretense that the US administration wishes to “fix” the JCPOA. Pompeo and especially Bolton have long advocated regime-change policies toward Iran, including war.

May 12 deadline is the deadline for Trump to renew sanctions waivers under the JCPOA.

Houthi rebels in Yemen have hit Saudi Arabia with several ballistic missiles, inherited from Soviet and North Korean-supplied arsenals but presumed to have been enhanced with Iranian know-how.

Israel has in the past month twice struck Iranian positions inside Syria, and is lobbying hard for Trump to scrap the JCPOA deal.

The Israeli parliament late on Monday (two days ago) granted Prime Minister Benjamin Netanyahu the authority to declare war with only the approval of the defence minister, currently hardliner Avigdor Lieberman.

Three separate US officials have told NBC news in the last 24 hours that Israel is preparing for war with Iran.

For over nine months the GCC has been split with Qatar effectively blockaded and subject to a war of words with primarily the UAE, Saudi Arabia – and supported by Bahrain and Egypt. Qatar has increasingly allied itself with Iran and Turkey – in part out of necessity to maintain basic supplies.

If the US were still a global superpower and led by a statesperson, its course of action would be clear: calm things down.

Easier said than done. The Middle East is full of players who possess partial autonomy and who as the Qatar dispute shows and increasingly unpredictable.

So there is now the real possibility of the Middle East’s scattered conflicts merging into one.

The responsible action is to de-escalate the conflict: to broker a comprehensive peace process for Syria, to restart the peace process between Israel and the Palestinian Authority, and to demilitarise the Persian Gulf.

All efforts should be made to save the JCPOA. The EU needs to drive this message. But the growing alarm at Iran’s growth and influence suggest a hard road ahead.

Meanwhile the arms industry is gearing up for a sales boom. No to war is not their mantra.

The great post war powers are no longer in control; the balance of power is not the safeguard that it once was.

It became obvious in Korea last week that it is easier to negotiate from a position of strength. Nuclear weapons have given North Korea an unprecedented opportunity to define their demands on the region and on the USA. This will not have escaped notice in Iran.

The worrying answer to my question is Yes. The unknowns are who, when and how bad?