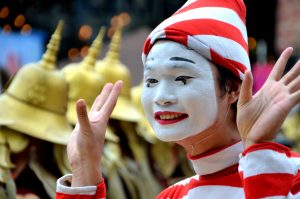 The 2014 Thai coup was four years ago this week. The peaceful coup was followed by limited protests that were quickly suppressed and a campaign to return happiness to the people.

There as also a promise to return democracy to the people and elections are planned for early in 2019.

The Economist had this commentary on the 4th anniversary.

Thailand’s ruling junta is preparing to hold an election—and to win it
Political parties are not allowed to hold rallies, but the generals are

“I am not a vacuum cleaner,” Prayuth Chan-ocha, who heads Thailand’s military junta, insisted last month. The general was responding to the accusation that he was trying to hoover up support from political powerbrokers in anticipation of the restoration of democracy. Nonetheless, he has been touring the country, addressing huge crowds in the company of local barons such as Newin Chidchob, from the populous north-east, who used to act as a political kingmaker before the military coup of 2014. The charm offensive comes ahead of elections currently scheduled for February, although delayed four times already. Mr Prayuth insists he will not support any particular party, nor run for office himself. But the constitution promulgated 13 months ago deliberately weakens existing political parties, and Mr Prayuth has been compounding their woes. The likeliest outcome seems to be a chaotic coalition, perhaps with Mr Prayuth, pretending to be surprised and reluctant, staying on as prime minister.

For almost 20 years Thai politics has revolved around a feud between the supporters of Thaksin Shinawatra, who served as prime minister from 2001 to 2006, and the traditional elites, represented by the army and the monarchy. The Thaksinites have won all six elections since 2001. When the army threw them out of office in 2006 and banned their party, they regrouped under a new banner and won the subsequent vote, in 2007. After the courts banned the new outfit (and Mr Newin defected from it), a third Thaksinite party won the next two elections. This time the army, although notionally committed to free elections, seems determined to make sure that voters are prevented from repeating their past mistakes.

The new constitution, approved in a farcically circumscribed referendum, creates a National Assembly consisting of an appointed Senate with 250 members, to be picked by the generals, and an elected House of Representatives with 500 members. The system of proportional representation to be used in elections will diminish the power of big parties, compared with a first-past-the-post system.

The prime minister will be selected by a joint sitting of the two houses. With 250 senators in the bag, the junta’s candidate would still need the votes of 125 members of the lower house to be selected, which explains both Mr Prayuth’s barnstorming and the emergence of several parties backing the army or run by military men. But the generals’ record is not impressive. They have presided over widespread human-rights abuses; economic growth is relatively wan; workers are burdened by high personal debt and foreign investors have been scared away. What is more, the new parties’ lack of policy ideas means they will fail to win support, believes Prajak Kongkirati of Thammasat University.
The obvious solution, from the generals’ point of view, is to smother the existing parties. Section 44 of the interim constitution, which has been in effect since 2014, gives the junta the power to curb “any act which undermines public peace and order or national security, the monarchy, national economics or administration of state affairs”. It has banned political activities, including gatherings of more than five people, and accorded itself the power to stop the publication of news it considers unconstructive or misleading. During April members of parties were supposed to declare themselves and pay 100 baht ($3.15) for a year’s membership or 2,000 baht for life. The public clearly sees little point in signing up: just 80,000 of the 2.5m former members of the Democrat party, the country’s oldest, chose to reconfirm their status.

To make life even harder for the politicians, a law passed last month bans policies that are intended to improve the government’s popularity but that may cause long-term damage to the economy or society—a definition so sweeping as to encompass nearly any government decision. Mr Prayuth seemed to have forgotten about the rule, however, when appearing with Mr Newin at the “Thunder Castle”, the stadium of a popular north-eastern football team (pictured above). Mr Newin said the region needed at least 10bn baht in government investment; Mr Prayuth duly promised to improve local infrastructure.

Preechapol Pongpanit, a Thaksinite former member of parliament, says other new rules block even the most basic forms of campaigning. “The best strategy for me to communicate with my people is to make a speech,” he explains. But election speeches will be allowed only at venues managed by the Election Commission appointed by the junta, perhaps only during working hours. The generals’ 20-year strategic plan, enshrined in law, binds future administrations to its development policies. The laws regulating MPs and senators, which have not yet been completed, may find ways to hamstring politicians further.

None of this has deterred new entrants. One of the most prominent of dozens of new parties is Future Forward, led by a 39-year-old car-parts magnate, Thanathorn Juangroongruangkit, who argues forcefully for a meaningful restoration of democracy. “There’s no consensus in the country on how to move forward,” he laments. Yet he says that during recent visits to the south and the obstinate north, a Thaksinite bastion, he encountered far more supporters than he expected, despite not being able to hold any rallies. His party has already had to satisfy elaborate rules regarding the distribution of its membership and branches around Thailand’s 77 provinces, without holding any political meetings. More hurdles are doubtless under construction.

The junta has had four years to make its mark, as long as a democratically elected government would have. But it has ducked necessary reforms. “They’ve run out of ideas,” says a foreign diplomat. The one area in which they have shown a little creativity is in keeping people who might do a better job than they do out of power.