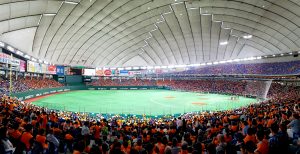 From the Japan Times: and yes, we were there!

Nick Martinez entered his first interleague contest in Japan with an overwhelming sense of familiarity.

The Hokkaido Nippon Ham Fighters pitcher said he’d watched so much tape of the Yomiuri Giants it “felt like I’d faced them before.” As for pitching at Tokyo Dome, good things just seem to happen for him there.

Martinez pitched into the ninth inning, Kensuke Kondo and Haruki Nishikawa provided some run support with a pair of two-run homers and the Hokkaido Nippon Ham Fighters won again in their home-away-from-home, earning a 5-3 victory over the Big Egg’s regular tenants in front of a crowd of 46,786 on Tuesday night.

The game was the interleague opener for both teams.

“Good pitching overall,” Martinez said. “I was able to pitch deep into the ballgame. I made a few mistakes on some bad pitches that they were able to capitalize on, but our offense came through for me today.”

Martinez (5-4) allowed three runs, all solo homers, on seven hits in eight-plus innings. Martinez was making his third start at Tokyo Dome and is 3-0 at the Big Egg, where he’s allowed just three earned runs in 24-plus innings. As a team, Nippon Ham is 6-1 in games at its former home park this season — five as the home team and two as the visitor.

Martinez, in his first year in Japan, said his prior experience at the dome helped take some of the unfamiliarity out of his first regular-season start against a Central League club.

“We’ve had a lot of home games here,” Martinez said. “I didn’t have that shock of pitching in a new stadium and having the fans really loud. It wasn’t new to me. I think that made the playing field a little more even.”

Kondo and Nishikawa helped tip the scales in his favor.

Kondo got things started in the first inning, following a walk by former Giant Taishi Ota with a home run to left.

“It was a fluke,” Kondo said of getting his third homer of the year on an opposite-field blast. “I had a kind of good feeling about it. I’m glad I was able to get this result in my first at-bat of the interleague season.”

Yomiuri shortstop Hayato Sakamoto cut Nippon Ham’s lead in half in the third, driving a changeup over the wall in center field to make the score 2-1.

The Fighters added to the lead in the seventh. Takuya Nakashima reached on a one-out double and Nishikawa drove him in with his two-out, two-run homer to center.

Yomiuri pulled one back in the bottom half on the inning on a towering solo shot by Alex Guerrero.

The Giants outfielder crushed Martinez’s offering, and the ball ricocheted off the middle of a JR East billboard above the seats in left field. Guerrero will receive a ¥1 million reward for hitting the sign.

“We threw him a lot of cutters, and I just threw him a bad one in a hitter’s count,” Martinez said. “He capitalized. He crushed it.”

Nippon Ham tacked on an insurance run in the eighth, with Shinya Tsuruoka connecting on an RBI double to make the score 5-2.

Martinez came back out for the ninth, but was greeted by a solo home run from Yoshiyuki Kamei and a long single, that nearly crept over the wall, by Kazuma Okamoto. He was relieved by Michael Tonkin who recorded the final three outs for his 11th save.

Yomiuri starter Shun Yamaguchi (4-4) took the loss after allowing four runs on seven hits in seven innings. He struck out 10 and walked a batter.