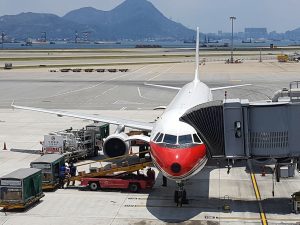 Mostly flying is fun….but when it goes wrong it can be horrible…and last week’s experience show just how far the Chinese airlines have to come to bring their service up to acceptable standards.

The Chinese carriers have all been embraced into the various airline alliances but this is not a marriage of equals; for instance China Eastern simply does not meet Skyteam standards. Their long haul services may be better but our flights from Hong Kong to Shanghai and then on to Tokyo were grim.

None of this is helped by the shambles that passes for transit at Shanghai’s Pudong airport. The Chinese carriers are hard-selling transit flights through their hubs – competing for instance on the kangaroo route flights to Australia. Be prepared for a miserable experience.

So what went wrong?

We boarded our battered looking Airbus A321 on time in Hong Kong. The seats are so old there is no cushion support. Full flight. But no big deal. Just over 2 hours 20 minutes to Shanghai.

Pushback should be 10.50am. We pushed back at 11.30am. Not a word from cockpit or cabin crew. We all silently sat there. We knew our connection was just 1hr 45mins so the late departure was a concern.

The crew served a meal. Dont expect much and you wont be disappointed. Though they did serve ice cream. Beer was the only alcohol served; though on a later flight from Shanghai to Chiang Mai a bottle of red wine had been found by the crew.

And parked at a remote gate. Bus to the terminal.

Upstairs an official looking guy tries to separate out all the foreigners and send them to a different arrivals area. Transit we say. He vaguely points at a door.

At the door a check of passport and boarding pass. With a grunt.

Then a long queue. 8 machines. Just 3 are working. The lady official supervising the machines was remarkable only for her rudeness.

Machine reads passport but cannot read the HKG printed boarding card. Have to queue up again – for a real person – who checks the same things as the machine but does not break down.

Then through to the security check. Have to beg to jump the queue. Except that the first official we asked could not give a fuck. We showed our boarding passes; showed him the time. Useless.

Second guy sent us to the priority lane. Slow but better.

Rush to the gate – want to use the washroom – no time. Last two passengers to clear the gate. Onto a minibus with staff. Taken to the plane.

And it is the same f***ing plane that we arrived on from hkg and hour earlier.

So we leave on time for Tokyo. Another flight with not a word from the cockpit.

We get to Tokyo Narita. Immigration is relaxed and not busy. At the luggage carousel there is a guy holding a card with our names on it. The bags have not arrived.

Yet the same airplane took us from HKG to PVG to NRT….but they probably took all the bags off at PVG – rescreened transit bags and ours did not make it.

Japan Airlines does the baggage handling for China Eastern. Four staff. Need copies of everything. And a description of the bags, contents etc.

They then want us to sign a form. It is in Chinese. What does it say? we ask. Do you have an English translation? We don’t know. There is no translation.

I am not signing a piece of paper that cannot be translated. Team Japan goes into a little huddle. And it seems they got the message.

It is close to 10.30pm. Narita is closing down. Do you have an amenity kit – toothbrush and paste etc. No we won’t. Well maybe you should for instances such as this.

Tokyo is a fine city when everything is going well. When it is not the Japanese descend to incompetence.

The bags turned up a day later.