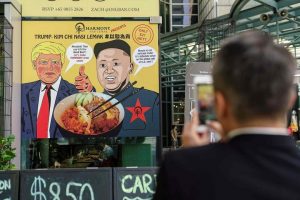 Yes it is happening. Yes the world’s media has taken the bait. Nothing substantive will come of it – but the Trump fan base back home will anoint this as a masterstroke by their president.

This was Dr. Robert Kelly on twitter this morning making his predictions for the Singapore summit: he calls the meeting a “nothingburger.”

1. Face-saving movement only on denuclearization. Team Trump has talked up CVID so much, as have US allies, that I have the feeling that they’ll get a fine-sounding rhetorical commitment, and maybe a few missile surrendered or some sites closures. It’ll be awfully embarrassing after so much CVID hype if Trump gets nothing, so I figure there’s some backchannel for something. But it will be more face-saving for Trump than a genuinely irreversible step. And certainly not CVID.

2. Trump will hype this relentlessly, no matter what comes of it. This is so easy to see coming that it probably shouldn’t even count as a prediction. But increasingly, I think the real point of this for Trump, given how unlikely CVID is, is for him to market this thing as something extraordinary for his voters back home – a huge win for the midterms. They’ll believe anything he tells them, so he just needs something, anything, and this becomes the greatest deal in intergalactic history. The fear is that Trump might give up too much just to get that win.

3. Trump will not walk out. This would be hugely insulting before the global media and fire hawks in Pyongyang to give up absolutely nothing for a decade. Even Trump must get that. This is bluster.

4. The talks will be short and have little to do with the real issues, because Trump gets bored easily and didn’t prepare, so he’ll have no idea what is going on in the room.

5. It will be a media circus. Again, so easy to foresee, it probably shouldn’t count as a prediction: The spectacle will be overwhelming, crowd out the substance, and will be supplemented by Rodman, Gorka, Hannity, KJU impersonators, Trump-Kim burgers.

6. There will be no peace treaty. The legal mechanics of this alone are tricky enough, that even if they sign something, it doesn’t really count, like when NK routinely says it will no longer respect the armistice. As with everything about this summit, this was too rushed, and Trump is too lazy and checked out from his own presidency’s policy detail, for something this momentous to be wrapped up in a just a few months.

7. In brief, it will be a nothingburger on what really matters: nukes, missiles, human rights, normalization, etc.: The real work afterward will get kicked back to Moon Jae-In, Mike Pompeo, and staff. Kinda makes you wonder why we doing this at all… END

And some other thoughts: Trump likes dictators and autocrats; so expect him to say that is that KJU is a man he can trust, who is a great leader for his people, with whom we can forge a lasting bond for security and prosperity.

Nonsense. Un murders his own family; his own people. He thrives in a regime utterly cut off from the real world; a regime that maintains its authority through fear, starvation and a brutal education regime.

The NK Summit will be where Trump recovers his ego after dealing with elected leaders of the free world at the G7 in Canada.

There could be some great plane spotting opportunities around Singapore if you can get close enough.

Singapore tourism will get a massive boost.

There will be some very tacky souvenirs.

Trump will be tired and distracted.

And credit where due. Hats off to the Singapore authorities. There really is nowhere else in Asia that could have managed the exceptional security and logistics, and hosted this boondoggle, at such short notice.