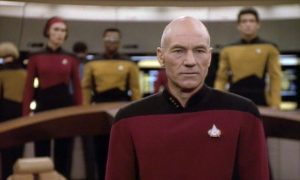 Two days ago I finished reading “The Autobiography of Jean-Luc Picard” written by David Goodman and published in late 2017. It is a quick and fun read.

Today CBS announced the return or Jean-Luc Picard in a new Star Trek show that picks up Picard’s life and career post Star Trek The Next Generation. The two stories may end up in conflict – in his biography Picard marries Dr. Crusher and he retires to produce wine in the family estate in France.

The biography starts from childhood, through the Starfleet Academy, onto the Stargazer, and eventually to the Enterprise. a tale of court martials, unrequited love, his capture and torture at the hand of the Cardassians, his assimilation with the Borg and countless other encounters.

Picard invites Q to his wedding. Q turns up in disguise.

And then today’s news: Patrick Stewart is to reprise his role as Jean-Luc Picard in a new series of Star Trek.

The CBS All Access series will reveal the next chapter of Picard’s life.

Announcing the news himself during a surprise appearance at the annual Star Trek convention in Las Vegas , Stewart said: “I will always be very proud to have been a part of the Star Trek: The Next Generation, but when we wrapped that final movie in the spring of 2002, I truly felt my time with Star Trek had run its natural course. It is, therefore, an unexpected but delightful surprise to find myself excited and invigorated to be returning to Jean-Luc Picard and to explore new dimensions within him. Seeking out new life for him, when I thought that life was over….I feel I’m ready to return to what comforting and reforming light he might shine on these often very dark times. I look forward to working with our brilliant creative team as we endeavour to bring a fresh, unexpected and pertinent story to life once more.”

Alex Kurtzman, showrunner on 2017’s well-received Star Trek: Discovery, will be an executive producer on the show.

Very good news. I will be watching. Will be see the return of Q? Yes please.