Home→Uncategorized→Trump – down but not out 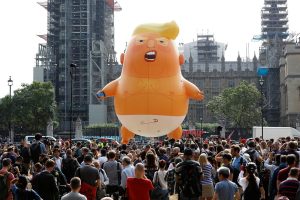 And the worst of this is that none of us are surprised – and none of the Trump support base will actually care much what their President did.

This is how divisive and paralysed the USA has become.

Mr Trump is a self-aggrandising liar. Period. This is why the work of the special counsel Robert Mueller is so important.

Mr Mueller had his best day on Tuesday. Trump had his worst day.

Both Cohen and Manafort had been in Mr Mueller’s sights. Both were convicted on eight counts, although Mr Mueller had handed over Cohen to the New York attorney’s office to prosecute. It is not the end of the story for Manafort, who is scheduled to go on trial in Washington DC in September over his work in Ukraine. Neither has Cohen finished. In court he admitted under oath that he broke the law at the direction of the president.

Cohen has a reason to cooperate with Mr Mueller – he can reduce his sentence if he assists in further investigations.

How Trump responds is key. Does he fight? Does he deflect? Does hs create a distracting crisis. To date he has encouraged the idea that he will lock up opponents, but he has not done so. Mr Trump attacks the “fake news” media but he has not sent thugs to smash printing presses.

Or – and this would be bizarre could he pardon all those found guilty through the Mueller investigation.  A flurry of pardons would deprive Mr Mueller of leverage to force their co-operation as witnesses. But it would also further provoke what may become a Democratic-majority House to begin impeachment proceedings.

Or he could sack Mueller – he has already twice tried to do so. Trump has already taken to calling Mr Mueller a “disgraced and discredited” man and alleging that the former FBI chief — and registered Republican — is in cahoots with Hillary Clinton’s people.

He has also compared the special counsel’s work to the red scare investigations spearheaded by Senator Joe McCarthy in the 1950s.

Trump will go – resigning citing ill health or indicted. But it will take time. And in the meantime he can still do a great deal of damage. The Watergate investigation took two years to play out. It brought down a president and sent dozens to prison. Mr Mueller has been going for 15 months.

Yet Mr Mueller has barely scratched the surface. The drama will now intensify. Trump has made it plain that he will not voluntarily submit to Mr Mueller’s interrogation. So how does this play out. Unknown. If the Supreme Court becomes involved that stacked body will look after Trump.

One reality from spending the last month in the USA – the american public has so far taken little interest in the details of the 15-month Mueller probe. And that should concern politicians on both sides.