These are the Thai League 2 (Championship) stadiums for the 2018 season ranked by capacity. Most are generic sports stadia leaving the fans a distance from the football. A shame as the Thai teams work hard to connect with their fans.

After tonight’s game and with just 2 or 3 games left in the season here are the League 2 standings: 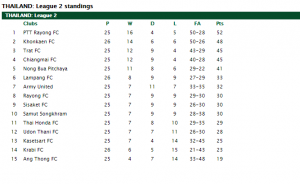 Khon Kaen do not play this weekend – so there is a possibility that Trat, Khon Kaen and Chiang Mai could all be tied for second place on 48 points at the end of the weekend with just two games to go.

The problem for Chiang Mai – the last home game is against PTT Rayong and then the final game away at Khon Kaen. At least they are masters of their own destiny.