Home→asia→Where will they all go? 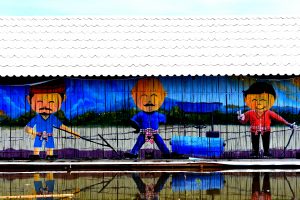 As Bangkok continues to grow unchecked, and more tourists flock to the Kingdom, Airports of Thailand has unveiled a 260 billion baht ($7.96 billion) plan that could roughly triple capacity at Bangkok Airport over the next 12 years.

The country’s main international gateway, opened in 2006 and has an annual capacity of 45 million passengers.

It was intended to replace the ageing Don Mueang airport but the new airport was already under capacity on Day One. Don Mueang did close, briefly. It was soon re-opened primarily for low cost operators. In 2017 Don Mueang handled 38.3 million passengers. Not bad for a closed airport!

At Suvarnabhumi actual usage has hit 65 million as more tourists arrive from overseas.

So the plan is to expand Suvarnabhumi. Expansion will be carried out over four phases, expansion phase 2 to 5, after which the airport will be able to service 150 million travelers annually.

Boarding gates will more than triple to 157 from 51 now. The original master plan had called for a total capacity of 135 million.

Phase 2, which is currently underway, will expand the main passenger terminal’s west side and add a satellite terminal at a cost of roughly 60 billion baht. Those additions, expected to open in 2020, will bring the number of boarding gates to 79 and official capacity to 60 million; oddly this is still lower than current passenger numbers.

Capacity will finally get out in front of demand after the 64 billion baht third phase, which includes the building of a second terminal connected to the existing one and a third runway. AOT expects Suvarnabhumi to be capable of handling about 90 million passengers in 2022, when construction is slated for completion, but only expects to receive just under 80 million that year.

Later steps, slated for completion around 2030, will expand the existing terminal’s east side while also building a third terminal, a second satellite and a fourth runway. By adding two more runways, the number of flights landing and taking off from the airport will increase to 120 per hour from 68.

Don Mueang International Airport, about 30 km northwest of Suvarnabhumi, will continue to operate. The skies will be crowded.

There are also plans to expand U-Tapao in Pattaya. Though that seems to be wishful thinking. One of few scheduled international carriers, Qatar Airways, has already ceased operations there. It is a low yield airport better suited to LCC operations.

The Suvarnabhumi expansion was started under the current military government’s campaign to improve infrastructure, but future administrations could delay or revise the plan after elections next year.

The issue for Suvarnabhumi is that it is not just the expansion of the airport that is an issue. It is all the travel and operational infrastructure that will also be required. Rail connections that are frequent and accessible. Road networks that are not a constant traffic jam. Airport hotels. Car Hire facilities. The list is long.

AOT, which is 70% owned by the government. The company’s sales are mainly derived from airport usage fees collected from carriers and passengers, as well as income from commercial tenants like duty-free shops.

Yet the airport operator’s monopolistic position has also drawn criticism. AOT was put on the defensive late last year after complaints of inflated food prices in its airports. The KingPower duty free monopoly is also up for review shortly.

Finally just how valid are the projected tourism growth numbers. Where are all these people going to travel to. Apparently there is a plan to develop the coast from Cha-Am down to Dolphin Bay as Thailand’s French Riviera. Roads and rai services would need to support this.

It is all a bit of a dream. And for many of the new generation of Asian tourists Thailand is at risk of being somewhere visited once before moving onto the next place of interest.

Tourism drives Thailand’s economy. But the mantra if you build it they will come may be wishful thinking.