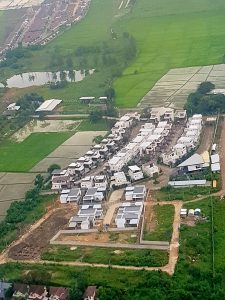 I have seen Chiang Mai grow since my first visits in the later 1990s. When my Dad and i played our last round of golf together at Green Valley in 2003 the course was in the countryside north of the city. Now there is development all around it. After a year of actually living in Chiang Mai it is time to rub the crystal ball and see what lies in the city’s future.

As we end 2018 the city still has something of a small town feel to it. I can drive from one end of the city to the other in thirty minutes. I can see rice fields, coffee shops, city relics, craft stores, local markets, temples, all within minutes of the city.

The University is an oasis of green.

The most successful of the local football teams gets just 1,000 supporters at its home games.

But there are also malls, high rises, highways.

There are two months a year of grim pollution with near unbreathable air.

And at present some 10 million visitors a year – which makes tourism, domestic and foreign, the heart of business in Chiang Mai.

The downsides of tourism: the airport is a shambles. Overcrowded, appalling parking and very limited public transport options. Public transport across the city is inadequate. Train services almost non-existent.

But it is home; laid-back, quirky, often frustrating but with many of the nicest people that you could meet anywhere.

Citylife Chiang Mai has this list from Narong Tananuwat, founder and president of the social enterprise Chiang Mai City Development, Co., Ltd. of the urban development milestones of modern Chiang Mai to date;

• The arrival of the train as well as opening of the airport in 1921
• The founding of Chiang Mai University in 1964
• The construction of the Superhighway (first ring road) in 1969
• The opening of the Lamphun Industrial Estate in 1986
• The Amazing Thailand campaign drawing large numbers of tourists in 1998
• The opening of the Greater Mekong Sub Region (and commercial usage of the Mekong River in 2000)
• The opening of the Night Safari and the Royal Flora in 2006
• The acquisition of Huang Huang and Lin Hui, the pandas, as a tourist attraction in 2009

These events impacted Chiang Mai’s growth by increasing tourism, creating jobs, and improving connectivity within the city and region.

Chiang Mai continues to grow, with many projects in the pipeline. The risk is that the city loses its appeal as it grows – the Northern culture and traditions; the greenery.

A new airport is needed. But does a city the size of Chiang Mai need two airfields; of course not. But that appears to be the plan with separate domestic (existing) and new airfields.

Just give us one new airport that works – and close down the city centre airport which increasingly contributes to noise and air pollution.

The new Chiang Mai International Airport will be in Baan Thil; basically south of the 1317 on the Lamphun and Chiang Mai border.

To sustain growing passenger numbers during the construction of the new airport, the existing airport will need an interim expansion, specifically the arrivals hall and the parking area.

In the meantime the new airport will be built but best guess this will become operational no earlier than 2023.

The Light Rail project is critical for a sustainable Chiang Mai. Though three lines were proposed by the Chiang Mai University team of engineers, the government has recently only approved one route — the Red Route — which will take passengers from Nakorn Ping Hospital to Big C Hang Dong via Mae Rim Road, the west side of the moat and Hang Dong Road. Expect traffic chaos when construction does eventually start.

Not enough. The new airport will only make sense with a light rail link to downtown Chiang Mai.

Another necessary project is the construction of a 184km motorway between Chiang Mai and Chiang Rai. This includes a 21km tunnel under Chae Son National Park. The government will reclaim a total of 120,000 rai of land and 900 households.

One real challenge is to reduce pollution and traffic in the old city. But roads are hard to expand due to historical sites and landmarks.

The growth in housing units is also part of the cities growth – with higher rise buildings close to major roads and new villages on the major access roads in and out of the city.

It is clear that Chiang Mai will face significant changes in the coming years. The rapid urbanisation spreading across Southeast Asia seems unlikely to leave Chiang Mai untouched.

Managing that growth for the benefit or residents and our visitors is paramount.