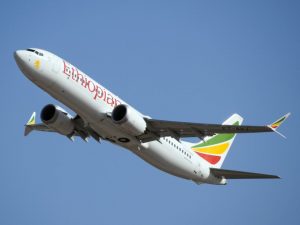 Some random thoughts on the Boeing 737 Max program after the crashes of Lion Air and Ethiopian Airlines.

Perhaps the most obvious comment is that Boeing is simply too big to fail. Defence contracts, the 787 and 777X programs, will all continue.

The 737 will continue but the Max branding needs a rethink. Airlines will still need their 737 orders of which there are over 5,000.

Recklessness is not endemic to the Boeing culture. But there is a growing sense of taking control away from the pilot when in reality all pilot aids should allow the pilot to overpower and disable them; the fact that MCAS did not is alarming

Keeping the Max on the same type certificate as the original 737 seems inappropriate, The FAA was not strong enough. This was basically a new airplane.

Was MCAS seems too severe a solution to not a massive problem?

More here from Business Insider : Boeing’s problems are mounting and things are going to get worse before they get better

This thread on twitter is worth a read in full: from the appropriately named “Captain Twit”

“I’m going to stick my neck out today and join some dots that surround the 737-Max MCAS (Manoeuvring Characteristics Augmentation System) chaos. My conclusion is stark, but it is a symptom that needs to be spoken about from an industry insider perspective.

So… it appears that MCAS was Boeing’s first foray into an area of design I like to call ‘We can’t trust all the pilots, so let’s make it do THIS’-philosophy. A domain that Airbus embraced and up until the 737 Max, Boeing chose not to.

This thread sets out to explain the intentions were good but the application, not so. And what part the senior executives of the Aviation industry played.

Let me begin by explaining what pilots train to do. There are two distinct areas of training.

SOP focuses on every pilot doing things the same. So you can fly with a complete stranger one day to the next.

That type of training, when all systems are functioning, is the easier part of the job. It is routine. It is to an extent, predictable.

It’s why aircraft globally fly millions of miles each day uneventfully. Bad weather, the odd bit of poor Air Traffic Control or poor pilot decisions creates the odd event, but on the whole deficiencies in pilot training are not revealed catastrophically

The second area of training is the Non-Normal training. A quaint little title given to what really should be called ‘Emergency’ training. This focuses primarily on when Aircraft systems fail.

Because when you lose these systems, your SOP becomes a whole lot more complicated

When Airbus designed it’s A320 a long time ago, it chose to create an ‘interface’ between pilot input and how the aircraft manoeuvred. If you stayed within the normal parameters considered ‘safe’, the Airbus reacted to pilot inputs just like any other

But if you tried to pull too hard, bank too steeply, that ‘interface’ intervened: a back stop to safety. Insulating the travelling public from any incompetent pilot on a bad day

In the main, this enhanced safety, making the day to day SOP less fatiguing and ultimately the training REQUIRED less important. But there was a problem with this philosophy…

What happened when the data being sensed by this ‘incompetence limiter’ was corrupted? Probably the best example was AF442.

At the time, Boeing engineers probably felt vindicated that their design philosophy was superior to Airbus. Instead they relied on quality training focussed on understanding the limitations of the pilot role.

Airbus, to give them their dues, have since radically altered non-normal simulator training advice, to cope with the moments when the sensors are corrupted

But until the 737 Max, Boeing kept their faith in pilot competency. Then something changed. Boeing decided to radically alter the centre of gravity of their 737 design with a longer body and more powerful engines.Because Airlines wanted more fuel efficient 737’s but less training

And that design handed a new problem to pilots who’d fly it: If the aircraft entered the limit of it’s capabilities in pitch (nose up) it reacted in a more dramatic stall than previous 737’s. Any momentary incompetence from a pilot would be harder to recover from if it stalled

So Boeing for the first time, forgot it’s pilot-centric philosophy and chose to stick to pressing launch deadlines. It released the aircraft with a perplexing lack of recognition of previous Airbus fatal experiences + launched the Max with MCAS without sufficient training advice

But their more unforgivable choice: It made the override procedure a delivery option like they were heated seats or a parking sensor on a new car! And what do modern airlines choose to do in this cost conscious era?

Non-Normal training is expensive. It requires several days each year in a Simulator. Understanding and practising these scenarios is for many airlines a cost too easily preyed upon by penny pinchers from outside Flight Operations

Outsourced training is now the fashion. Minimal Simulator time. An iBook to read rather than a real simulation in a dynamic environment

To digress for one moment. Here’s an opinion I hear often from non-pilots in casual conversations about my role.

Some of you believe the automation in modern aircraft to be ‘sentient’. Far from it. It will always need human input.

Even if we ever go down the road of remote, pilotless aircraft, SOMEONE will be in control. Drone crash statistics are testimony to this technological arrogance that one can only conclude are suppressed to keep the concept of pilotless Air Transport open

…to bring all these points to a conclusion. Pilots are professionals. But they need training to be of a high standard that you rightfully expect. So, if you’re a safety conscious ticket-purchaser wondering what factors you should consider before your next flight. Consider this:

The cost-cutting in my industry is starting to nibble away at the pillars of safety. Outsourced training is becoming a constant repetitive mantra. Minimal training for massive SOP changes are being delivered with self study PDF’s

CEO’s making noises about reduced pilot complements and remote pilot systems. And I haven’t even mentioned the little known epidemic of pilot fatigue.

If you want to assert your consumer choice with safety as the highest factor, tweet and email these CEO’s. Because this is your bog-standard, ordinary pilot telling you that from inside these airlines, they’re not listening. They won’t stop unless you, the passenger tell them.”

Flying remains remarkably safe; but a shortage of pilots and continued cost-cutting across the industry mean that risks are being taken and the costs of doing so will rove significant….as Boeing is discovering.