Home→Sport→Seven-Five. A classic or a horror show? 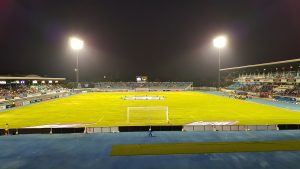 A classic or a horror show. Maybe both?

Others called the game breathless, astonishing.

The highlights from True TV are here:

The goal sequence with Chonburi first as the home team.

Frenetic. Awful defending. But have a look at the goals. There are some high-quality finishes and it is hard to fault either goalkeeper.

Without the injured Evson Chiang Mai were badly exposed in defense.

Thossopol was replaced after 55 minutes. He appeared to be carrying an injury. Suwannaphat, the other member of the starting back 3 made one great second half block but Lukian and Cruz exposed his lack of pace.

Leading 2-1 Chiang Mai also lost the experienced Pichitphong to injury after 35 minutes. It may not be a coincidence that Chonburi then scored 3 times in the ten minutes before half time.

From 6-3 we clawed the game back to 6-5 in second-half injury time. A 6-6 draw became a bizarre possibility – there was time for one final attack – except that it was Chonburi who secured the win with their seventh goal of the night.

Our injuries are not much more than excuses. Chonburi had the better chances; not just the seven that they scored. Every attack looked likely to result in a goal and Lukian was on fire.

Our squad does not look deep enough. WIthout Evson and Thossopol we have no defence. The two substitutes, Wanmai and Patipan, struggled – although Wanmai did score with a spectacular 25 yard strike which may have been the goal of the game. 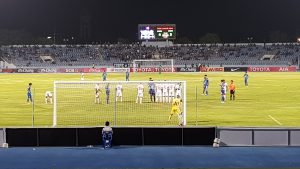 Positives. There are not many. Ekanit looked back to his best. Scored one and made at least two of the other goals. Azadzoy looked sharp. Gionata worked hard but is still a little too anonymous.

Now time for a rant. Chonburi put away supporters into half of a low stand behind one of the goals. The other half of the stand to the left facing the pitch is left empty. There is a tall steel mesh fence on the wall. This is the only part of the stadium where the crowd are fenced in. The stand is only about eight rows high. Only in the top four rows can fans see over the steel fence. There is a running track around the pitch. So the near goal is about 30 yards from the fans and the far goal nearer to 150 yards away. Because of the low stand our view of the game was appalling. 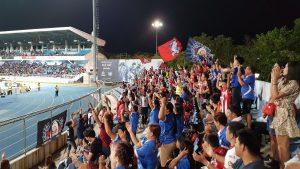 But we had about 200 Chiang Mai fans in Chonburi. Some faces are becoming familiar and it is always good to see everyone. We made some noise but it is all very good natured. My third away game of the four that we have played this season.

After the game we did bump into Dale Farrington – who does a great job with The Chonburi FC english fanzine – it was good to talk Thai football and a bit of Watford, Oldham and Leeds as well.

We also said a quick hello to Chiang Mai’s Coach Carlos – his apology for the defeat was not necessary. He mentioned the injuries.

But really who cares – this is a game that everyone who was there will remember and talk about. Twelve goals – the result not certain until 3 minutes into injury time. The players (from both sides) gave everything. Comical, dramatic, breathless. You had to be there to appreciate it. We were, and it will live long in the memory.

In the relegation zone we need some points – but in this league it really does appear that there is little to choose between the teams. The secret is keeping the squad fit and managing your form players. There is a long way to go.