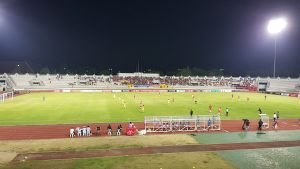 Funny old game. Football. On a night when Liverpool stormed into the Europan Champions League Final with an outrageous 4-0 win against Barcelona (4-3 over the two legs) Chiang Mai came back from 1-2 down with an 88th minute equalizer at home to Chainat.

Which proves the old adage that it really is never over until the whistle blows. Chiang Mai had one second half shot on goal – a trickler from Ekanit that crept into the corner while substitute Ronnachai fortunately had the good sense to jump out of the way.

It would be good if I could like Chainat. A small town club that has held its own in the Thai Premier League for this season and last. But when they led 2-1 they tried to shut the game down from the 25th minute. And that is just ugly to watch.

With injuries Chainat were missing all their non Asian players. I am not that sympathetic as Chiang Mai has had a series of injuries in particular to key defenders.

The Chainat manager spent far too much time complaining to the fourth official and made an issue of the referee after the game suggesting that the referee was too slow and handed out yellow cards to the Chainat players only. I counted three cards for Chainat and two for Chiang Mai.

Eliandro opened the scoring with a smart finish from a very neat Azadzoy pass. Three minutes later Ratchanat equalized for Chainat with a 40 yard free kick – clearly meant as a cross – but since neither defenders nor goalkeeper showed any interest the ball floated on the wind into the net. Awful defending.

Teerath then saved low to his left from Ekanit before a terrific volley from Chatri gave Chainat the lead after 25 minutes.

Teerath then saved at the feet of Eliandro – but this was a great chance and Eliandro’s first touch suggested bricklayers’ rather than footballers’ boots. He was to do this again later. So frustrating. He makes some great runs. He has power. But the finish is either sublime or horrendous. There is no in between.

Adam Tull was the first of Chainat’s substitutes at half time. A Philippines international who started his career with Sunderland and then had loan spells with Brentford, Bradford City, Leyton Orient, Portsmouth and York City. He signed for Burton Albion in 2013 and after being released had a second spell with York in 2014. He played in the Philippines from 2016 to 2018 before moving to Chainat. Why all the detail – because sometimes it is fun to see how a player ends up in a small province in Central Thailand!

51 minutes gone and a great turn by Eliandro sees him then blast high over the bar. At least hit the target. As Chainat started to slow the game down it became a question of how long does it really take for a free kick or corner? Chiang Mai not helping their cause by giving away a slew of silly free kicks. The crowd complained but the referee seemed to be getting most things right.

Ronnachai came on for Suwannaphat – a striker for a defender – good move – after 70 minutes. Ronnachai shot just wide four minutes later after some neat football with Ekanit.

It was not until the 85th minute that Chainat had a shot at goal with Nont turning over a long range effort from Poomipat – a comfortable save. Poomipat was booked in injury time for a dire challenge on Evson that looked worthy of a straight red.

And then 88th minute Azadzoy turns up on the left wing – his smart cross is half cleared to Ekanit on the edge of the box and his scuffed shot trickles in for a deserved equalizer.

A point won or two points lost? For a while between their first and second goals Chainat looked very good – some great movement off the ball and they were good value at 2-1. Then they seemed to think they had done enough and could sit on their lead.

It was good to see Evson and Thossapol back. Evson was solid; Thossapol not at his best but his long throw-ins still cause defensive panic. Azadzoy was often invisible yet he set up both goals with pieces of skill that were not seen from anyone else on the pitch. Gionata had his best game for Chiang Mai though faded as the game went on. The rest huffed and puffed.

So 2-2. There are some difficult games ahead – starting with Bangkok United on Sunday.

We did at least find a new way to slow the game down; More water fountain than sprinkler system. 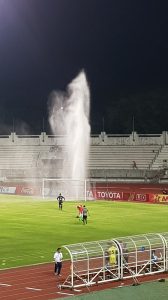