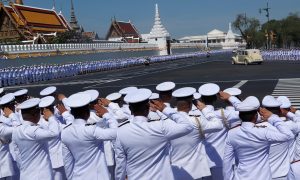 This week, after the Coronation of Rama X, the Election Commission released the final results of an election that took place in March.

Palang Pracharat, a party created to support the military junta that came to power in a coup in 2014, battled Pheu Thai, which is loyal to Thaskin Shinawatra, a former prime minister who has feuded with the generals since an earlier coup removed him in 2006.

The ruling junta needed to make sure that the mistakes of 2007/2008 were not repeated. If an election was held the junta needed to ensure that parties loyal to Mr. Thaksin could not dominate in Parliament.

A new constitution was written – and yes the people voted for it – largely because there was nothing else to vote for and something was better than nothing.

But still the system has to be fixed. The Junta banned all political activity until a few months before the election, disbanded a second party linked to Mr Thaksin and awarding itself the power to appoint all 250 members of the upper house.

The new Prime Minister is elected by a majority of the two houses combined; 250 in the appointed senate and 500 in the elected lower house.

Despite all the planning shortly after the vote, a coalition of seven opposition parties, including Pheu Thai and Future Forward, which is popular with young voters, announced they had won a slim majority in the 500-seat lower house.

That is not what the results unveiled this week show.

The Election Commission concedes that Pheu Thai won the most seats, 136, followed by Palang Pracharat, with 115, and Future Forward, with 80.

It annulled the result in one Chiang Mai district won by a Pheu Thai candidate, ordering a fresh election.

However the key to the change in numbers was from changing the formula whereby the commission allocates the 150 seats (out of 500) awarded on a proportional basis.

The result was to reduce the tally of the big parties and hand seats to a plethora of tiny ones as long as they received a minimum of 31,000 votes. Pheu Thai meanwhile was granted no seats from the party list.

The changes reduced the opposition alliance to a minority of 245 seats.

The Democrat and Bhum Jai Thai parties are assumed to ally to the ruling Junta and no doubt promises have been made and will be paid for. It is tragic for Thailand that the Democrat Party sees its natural alliance with the military.

27 different parties now hold seats in the lower house. A weak, pro-military coalition looks the most likely outcome. The junta has presented its handpicked list of senators to the King for approval. The two houses will then vote in a joint sitting to select a prime minister. The incumbent, Prayuth Chan-ocha, who led the coup in 2014, had seemed determined to stay on. Bangkok is rife with rumours, however, that the king might promote the selection of a less divisive figure, perhaps from the Privy Council, which is packed with soldiers and technocrats. Either way, the notion that the government ushered into power by the election will have any democratic legitimacy—always a doubtful proposition—now looks entirely forlorn.

As if to underline the point, the authorities have set about persecuting Future Forward and its leader, Thanathorn Juangroongruangkit, with a gusto typically reserved for supporters of Mr Thaksin. The party and its leadership face 16 accusations of wrongdoing. The Election Commission intends to press a charge against Mr Thanathorn for holding shares in a media company, which candidates are not allowed to do. He has also been charged with sedition and computer crimes. He denies all the charges, which could lead to a ban from politics, a prison sentence or the complete dissolution of Future Forward. Thanathorn believes the 16 cases are intended to pressure him to negotiate with the junta’s political allies. He claims that at least five of Future Forward’s MPs have been offered $1m apiece to change party.

Oddly despite all the uncertainty the Thai economy and currency remain robust. Perhaps because we have become so inured to political manoeuvering in Thailand and perhaps because outside of Bangkok no one really notices or I suspect cares that much.

Sourced in part from The Economist – without a link to the article which contains other sensitive matters.