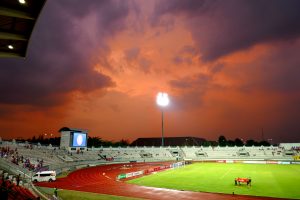 At last – three points. Our first win since April 3rd at Suphan Buri and just our second clean sheet of the season.

Prachuap arrived at the 700th anniversary stadium in sixth place in the Thai first division. However, their away form is dismal with just one won now in seven games. They have been demolished at Port and Bangkok United.

Prachuap were without the much-travelled Brazilian forward Caion. Siroch was his invisible deputy. And they never looked like scoring at Chiang Mai last night.

Up front was also a concern for Chiang Mai – where would our goals come from? Ronnachai started in place of our suspended (one match for four yellow cards) top scorer this season, Eliandro. It is like replacing your new HiLux with a Dodge Dakota. One is fit for purpose. The other, sadly, is not. 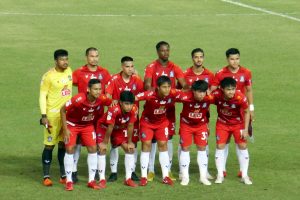 At the back Evson and Thossapol are now a formidable partnership with Suwannaphat quietly competent alongside them in a back three.

Evson did not put a foot wrong all match – and the big threat of Matheus Alves did not get a look at goal. “He is so big he looks like a buffalo” was the not inaccurate analysis of the lady behind us. Evson was my man of the match.

The first 35 minutes were quiet – a comfortable save by Nont from a long range effort and Azadzoy shooting wide of the far post when it was easier to at least hit the target.

Then a penalty claim as an Azadzoy cross was blocked. On the tv highlights (see below) it looks like a clear handball. “No” says the referee. The linesman who was looking straight at the action has no idea. Chiang Mai protest. They get a corner. Surawich floats a high looping ball to the back post. It is not a great corner. But Evson rises like a Bangkok skyscraper to head the ball back across goal. The goalkeeper is rooted to his line and Chotipat, maybe the shortest played on the field, has the simplest of headers to make it 1-0.

The highlights are here:

In the 44th minute Thossapol goes down with what looks like knee injury following a strong collision. It takes an almighty knock to floor this man. At half time he leaves the field with an ice-pack strapped to his knee and the crowd all sense that his work is done for the day.

But this is Thossapol. He is like a warrior. He knows that even at 50% he is a better player than anything that our limited squad has on the bench. If you were in the trenches with just one person between you and oblivion you would want this guy with you. He battles through the second half collapsing in the six yard box as the final whistle goes. 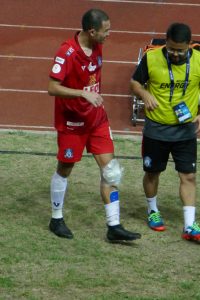 Will he be fit for Wednesday at Port FC?

Chiang Mai really should have wrapped up this game in the second half. Good chances for Azadzoy, Ekanit and Ronnachai were squandered. Some of our football was as good and as flowing as anything we have played all season. But a one goal lead is always nerve-wracking. Prachuap never found a pattern. A shot over the bar. A corner. A yellow card foul by Evson with Nont punching the free kick clear. Yet Nont did not have a shot to save in the second half.

Four minutes of injury time. Both sides have used all their substitutes. A free kick in front of goal 25 yards out. Blasted at the wall. The referee blows for time and it was all over.

A win that clearly meant so much to the players, officials and fans and that lifts the club into 12th place in the league.

Prachuap were awful. But they are still 7th after this game.

At half time Chiang Mai officials announced that the next two home games (16 and 29 June) would be played at the 700th anniversary stadium which is to be renovated before the AFC under-23 tournament to be held in 2020. We have no idea where the last six home games will be played. There is a real connection between this hard-working, underdog team and its supporters. It would be a tragedy to take the team away from Chiang Mai. 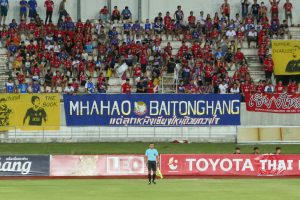 After 22 September only the home game against Buriram in late October remains. Ideally the club and local sports authorities will find a way to carry out their renovations while leaving the stadium fit for our home games until late September. The goodwill that would create is incalculable.

The next two away games are at Port and Buriram. The home games are with struggling PTT Rayong and then Pattaya United (Samut Prakarn). There are no easy games in this league. With such a limited squad we need key players to remain injury free and to trust that heart and hard work are enough to keep picking up points along the way.