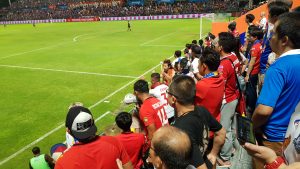 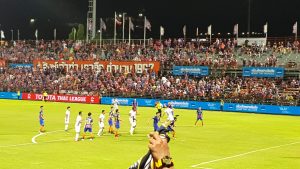 Back in Bangkok last night for the visit of Chiang Mai FC to league leaders Port FC.

The first thing to say is that Port have a real football stadium and that makes watching the game so much more enjoyable even when the away fans are penned by the corner flag behind the goal line. 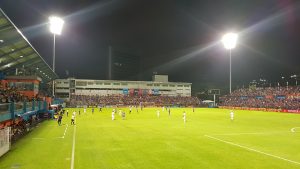 Port FC lead this league for a reason -they are the best side I have seen this season and against Chiang Mai they were faster, stronger and more direct.

But Chiang Mai are a battling side. And that maybe is why defeat does not hurt so badly.

Last night’s highlights are below: yes that is me on the left of the three elegant gentlemen in the white away shirts!

The first half was not as even as the CMFC highlights reel suggests. We were over run despite lining up in almost a 5-3-1-1 formation. But we held our nerve, weathered an early storm, and saw two top class saves from Nont, from shots by Pakorn and Sirikhorn, that kept it scoreless at half time.

We even had a couple of half chances at the other end. But for the most part it looked like a training game for Port as their relentless attack sort to break down the Chiang Mai defence where Evson and Thossapol were solid throughout the first half.

At times we were simply too deep and when we tried to move out we were allowing Port to press high up the field. It was looking more and more like when rather than if Port would score.

But half time came. Port had become frustrated and we were half-way to a result.

The half time team talk probably asked for more of the same.

But the plan was ruined within two minutes of the restart with the referee giving a penalty against Chotipat who appeared to win a clean tackle on Boskavic. Though in fairness the referee was much closer than my 100 yard view. The highlights above are inconclusive. The Chiang Mai protests suggest a questionable decision. Boskavic rolled in the penalty sending Nont the wrong way.

In the 61st minute Port broke down the left while Chiang Mai protested for a foul. Bordin’s close range low cross was parried out in front of the goal by Nont and swept home by Sumanya.

Four minutes later it was game over after Boskavic sees the late run of Siwakorn (no defender saw it!) for a simple tap in. It was a clever goal.

But Chiang Mai did not surrender. In the 70th minute the Port defence backed off Ekanit who rifled the ball into the top left corner. The goal of the game. Eliandro then had two strong chances to pull back another goal shooting wide on both occasions.

Ronnachai came on for Suwannaphat. A forward for a defender. At least we were going down battling.

Time for one more Nont save with his feet and a Port header over the crossbar. And the final whistle.

One grumble. In the last 15 minutes Port players started to go to ground like Canadian pines. The physios were on. The stretcher carriers were on. No one was injured. They simply wanted to slow the game down as Chiang Mai pressed for a second goal that would have at least ensured a lively finish. Four minutes of injury time was some way short of the time actually lost.

Port are a much better side than that. The theatrics detract from their ability.

3-1 may be a bit harsh. We were brave. But that is not enough against a team that has greater movement, strength, awareness and quality. Port are now 6 points clear at the top of Thai League One. It may be their year,

A word for the Chiang Mai fans – they were top class – plenty turned up at PAT stadium for a midweek game and they sang and cheered for 90 minutes and more. The fans deserve more from the owners including a commitment to investing in the club and playing all home matches in the city. The support is there.