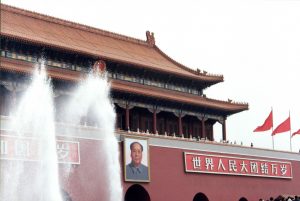 After 30 years it is not so much the events of 3rd and 4th June in Beijing’s Tiananmen Square that upset me but China’s constant denials that anything of consequence actually happened.

It was a massacre. An army using live ammunition on unarmed students, friends and families.

In China it is described as an incident.

No one know how many people died – but the Red Cross figure of 2,700 is supported by Jan Wong in her book Red China Blues with an estimate of 3,000.

Of course others died in the months and years afterwards. The disappeared. Protestors and student leaders who were rounded up before they could seek safety.

What was it like to be there – exhilarating; frightening. These pictures tell a story: Rare shots of Tiananmen Square, before and after the 1989 massacre and also Before the tanks – More previously unseen shots of the 1989 Tiananmen Sq. student movement

There is limited video and news material from that night and day: this was a time before digital cameras and mobile phones made everyone a witness. The video that exists is from news crews and freelancers who were in Beijing to cover the protests. No government video or pictures have ever been released.

Kate Adie was the BBC reporter in Beijing – this is her report from that night. Fearless reporting. Frightening scenes.

Canadian journalist Arthur Kent has recounted the horror of the 1989 Tiananmen Massacre using newly restored video footage he shot during the crackdown.

The 13-minute film Black Night In June documents firsthand the bloody crackdown as student protesters fell back into the square after the People’s Liberation Army opened fire.

Australia Broadcasting has produced this documentary; the footage from the ABC’s archive shows scenes of joy and optimism on the streets of China that have not been seen since the Communist Party’s brutal killing of its own people 30 years ago.

To mark the anniversary of the Tiananmen Square massacre, Four Corners has carefully pieced together vision and audio captured by ABC reporters and crew that show how the events unfolded in the Spring of 1989.

The film, Tremble and Obey, includes interviews with many of the key participants of the protest movement who were subsequently placed on China’s ‘most wanted’ list.

Like the events of thirty years ago – it starts as an uplifting movement of hope and belief – and ends in tears, pain and anger.

There is also some important writing on the events and fall out from 4 June 1989.

This is Ai Wei Wei writing in The Guardian : The west is complicit in the 30-year cover-up of Tiananmen

This is from the writer Ma Jian on Surviving Tiananmen: ‘I might have been one of the hundreds or thousands who lost their lives’

And from the Nikkei Asian Review: Tiananmen and the end of Chinese enlightenment – which notes that “it is difficult to imagine the intellectual fervor and diversity of the 1980s when we look at today’s China, where ideological re-indoctrination, censorship, and persecution of outspoken thinkers have turned the country into an intellectual wasteland.”

1989 was not a hopeless cause. It gave a voice to a generation. The 2014 Umbrella movement in Hong Kong had similar roots in the student movement. The BBC made a strong comparison in this October 2014 report.

To get rich may be glorious. To do so while obliterating your history is irresponsible. Tiananmen 1989 will never be forgotten because the spirit of the people gathered there thirty years ago lives on today among anyone that hopes for an open, honest, democratic and accountable society.