Home→asia→Hey lah – our Prayut’s back 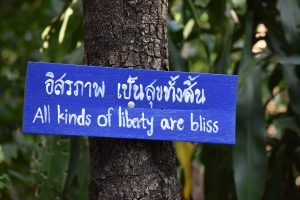 “He’s underneath the window, she’s singing, “Hey, la, my boyfriend’s back
You shouldn’t come around here singing up at people like that
Anyway, what you gonna do about it?”:

What are we going to do about it. I know lets all get upset on twitter. Trending this week were the hashtags #RIPThailand and #NotmyPM

That is probably the extent of the protests – at least for now.

Thailand’s parliament elected junta chief Prayuth Chan-ocha as prime minister on Wednesday, leaving the powerful military in control of the government after an election widely dismissed as a charade.

Mr Prayuth, the former general who has led the kingdom’s military dictatorship since a 2014 coup d’état, was easily confirmed as prime minister in a joint vote of the two houses of the Thai parliament. With all the upper house votes cast of Prayuth he won 500 votes from the 747 MPs who cast their ballots.

Mr Prayuth’s only rival for the job was Thanathorn Juangroongruangkit, the head of the new Future Forward party, who had the support of six other opposition parties that aimed to block the junta from government. He came in a distant second with 244 votes. Three MPs abstained.

The new government in the lower house will be composed of Mr Prayuth’s Palang Pracharath party (PPRP) and 18 other parties. Many of thise parties have just one seat resulting from the creative allocation of party seats by the Electoral Commission.

One analyst described the election as a “whitewash” meant to legitimise the military regime in the eyes of the EU and the US, which scaled back relations after the 2014 coup. “The election doesn’t mean we are returning to democracy,” said Titipol Phakdeewanich, dean of the faculty of political science at Thailand’s Ubon Ratchathani University. “It means a consolidation of military power in Thai politics.”

Perhaps the saddest sight was the so-called Democrat party which is in reality a conservative, royalist group voting to sit in a coalition with the pro-junta PPRP. Bhumjai Thai (“Pride of Thailand”), a party backed by the pro-cannabis businessman Anutin Charnvirakul, also lent its votes to the new coalition. Nothing like putting personal interests before those of the nation.

The March 24 vote had been meant to restore the kingdom’s democratic credibility in a year when it crowned a new king and is holding the rotating chairmanship of Asean, the regional group. But it was marred by claims of irregularities over counting and alleged bribes offered to some voters.

Before the voting even started, the Thai Raksa Chart party was disqualified from running after it breached monarchist taboos by nominating Ubolratana Rajakanya, older sister of King Maha Vajiralongkorn, as its candidate for prime minister.

Despite this, Pheu Thai, the biggest opposition party associated with the exiled billionaire Thaksin Shinawatra, emerged as the largest in the popular vote. The election also saw the rise of Mr. Thanathorn’s Future Forward Party. Thanathorn and other members of his party have been harassed before and after the vote. Police have laid charges of sedition and “computer crime” against Mr Thanathorn — the latter in connection with a Facebook post he wrote criticising the junta — either of which could see him jailed.

Rather oddly and without any sense of irony Mr. Prayuth recently urged his fellow Thais to read “Animal Farm”. The process that led to his affirmation as prime minister was redolent of the coup-leading pigs of the novel, who declare: “All animals are equal, but some are more equal than others.”

Some clearly have a massive head start. All 250 members of the upper house were appointed by Mr Prayuth’s government. Roughly a third of them have links with the armed forces or the police. The body contains such impartial figures as Mr Prayuth’s younger brother.

Or consider the national election in March in which Thais selected the 500 members of the lower house. The country’s election commission decided to change the formula by which it apportioned party-list seats after the vote had taken place, robbing anti-junta parties of a slim majority in favour of tiny, biddable outfits. The commission and the constitutional court have also helped by disqualifying opposition mps and of course banning an entire opposition party.

The party founded last year to support the generals’ interests, Palang Pracharat, won 24% of the popular vote in March. To turn its meagre showing into a governing majority, Palang Pracharat has assembled an unwieldy coalition of 19 parties. In addition to the minnows, it will have to keep in line the 53 mps of the Democrat Party, Thailand’s oldest, and the 51 of the Bhumjaithai Party, an openly transactional operation, to maintain its slim majority of 255 of the 500 seats in the lower house.

The price of co-operation varies. The Democrats say they want to shape economic policy, change the constitution and curb corruption. They look set to win a deputy prime minister and three cabinet seats (including the coveted ministry of commerce). Already one of their own, Chuan Leekpai, a former prime minister, has secured the job of speaker of the lower house.

Bhumjaithai may earn the ministries of transport, health, and tourism and sport. Its boss, Anutin Charnvirakul, says its conditions for working with Palang Pracharat are simple: that the government enact Bhumjaithai’s policies. This will include liberalising rules around farming marijuana (which was legalised for medical purposes by the military regime in December). “I’m a political engineer,” explains Mr Anutin, “Since we are not ideologues we do things practically.”

Mr Thanathorn’s political purity terrifies the establishment. The band of self-interested survivors clustered around the prime minister are not paragons of consistency or principle. They are likely to jostle constantly for advantage and favour, making the government unstable.

Mr Prayuth, meanwhile, has not given much inkling of what he plans to do with his mandate. His latest slogan, “Security, Prosperity, Sustainability”, does not shed much light. He did not bother to attend the session at which he was chosen or lay out an agenda to mps, saying—again, without irony—that his actions over the past five years speak for themselves.

As for the future – the constitution empowers the senate appointed by the junta to intervene to resolve gridlock in the lower house over important legislation, such as the budget, if it stalls for more than 105 days.

“While the government is a farce from a democratic perspective, I suspect they have the resources to keep their thin margin together for some time,” says Karen Brooks of the Council on Foreign Relations, an American think-tank.

Meanwhile the only real opposition to the Prayuth government will be voiced on social media. And for foreign governments it will be business as normal.