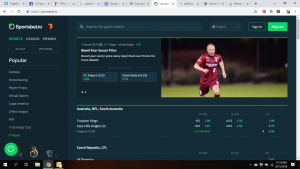 The three year agreement is with Coingaming for its sport betting brand, Sportsbet.io. Sportsbet.io operates a cryptocrurrency sports-gambling book and casino.

For those wanting a little more detail Sportsbet.io is owned and operated by mBet Solutions NV (Heelsumstraat 51 E-Commerce Park Country Curaçao). It is licensed and regulated by the Government of Curaçao under the gaming license 1668/JAZ.

Its staff appear to be based in Estonia.

The site is powered by the Coingaming.io Bitcoin Sports and Casino Gaming platform, and allows players to play with EUR and Bitcoins. The site is not an exchange and funds can not be converted from euros to bitcoins.

“Really disappointed in #watfordfc – a supposed family club promoting a bitcoin based online sports gambling and casino business. Curacao registered. Estonia staffed. And a laughable press release. @WatfordFC – these are not the values of our club. Shameful.”

This led to a torrent of abuse from Watford fans – apparently as I am based in Thailand where apparently torture is commonplace and there are no women police officers my view does not matter.

Typical was “He says after moving to a country where women aren’t allowed in the police force” – not really relevant to the discussion. Or factually accurate.

Some of the comments were much more personal – and of course anonymous – the sort of things that no one would ever say to you directly.

“I’m afraid every club has happy clappers who will not tolerate questioning the club. Not all supporters are so.”

Its facts that seem to confuse Watford fans:

One writes: We’ve had online betting companies on our shirts for about 5 years now. Why the sudden outrage?

No we have not – FXPro are a regulated financial services company.

Another commented: “Really if anyone really cares as long as they pay the money everyone now has betting sites sponsoring them can’t wait for new shirts and will wear mine with pride”

Again facts: it is clearly not everyone: while the Premier League and the Football League Championship are dominated by betting sponsors in the Premier League, it’s nine from 20 teams. Far from everyone. The everyone else it why shouldn’t we argument is false. We do not need to all reach for the lowest common denominator.

Here is a favorite: “Well Im disappointed in your post. Nobody actually cares for your opinion. It will generate millions for the club which is massive. We could be sponsored by Birdseye and i still wouldnt give a monkeys. We have the best people in charge who care for the club. Please follow suit.”

I am not sure what he has against BirdEye – I do not think fish fingers are addictive.

Facts: the new sponsorship will generate maybe gbp7million a year. Double the FXPro sponsorship from last year. But it is not “massive.” It is petty cash compared to the gbp100 million plus from global and uk tv rights. And the shirts form a very visible part of the club brand.

One so called Watford fan, anonymous of course, seemed more interested in Thai ladyboys than the merits or otherwise of gambling sponsorship.

There were too many Watford supporters sadly intolerant of diverse opinions. Last night was quite an education.

The Gambling Commission has launched a three-year strategy to cut gambling-related harm. The national strategy focuses on prevention, education and treatment and support for problem gamblers.

Ahead of the announcement, two UK betting giants said they would change how they advertise as part of their attempts to deal with the problem.

That should have sent a message to Premier League clubs and administrators – it did not.

GVC has called for an end to all UK sports-betting broadcast advertising, at any time of the day, on live and repeated sporting events.

Up the road at the club watford fans love to hate – Luton Town FC – the chief executive Gary Sweet has refused more than £500,000 from gambling companies as the club “do not feel comfortable” being sponsored by them.

How sad that the original family club has no such principles. The honorary Life President of Watford is Sir Elton John – no stranger to the dangers of addiction. One reviewer of his biopic ‘Rocketman’ noted that “what stands out for me is its brutally honest look at how addiction can take down anyone — even a multi-millionaire superstar like Sir Elton John. His story is the same as mine, and of millions of others who have suffered from addiction.”

I wonder how he feels about gambling sponsorships?

The point is that there are always alternatives. One twitter user (anonymous of course) told me to “Grow Up. It is business.”

There is good and bad business. There is ethical and unethical business.

Cigarette sponsorship is banned. Alcohol sponsorship is apparently not banned officially but is clearly avoided by sports teams. Pharma advertising does not happen in sports.

The problem is that shirt advertising is all about visibility – at the ground – on tv – in live games and highlights.

The questions for Watford FC are:

This new deal does not reflect those values. We have become a team where money matters over everything; more than the principles and integrity on which the club grew.

So after 49 years – 1970 was my first visit to Vicarage Road – I think that is enough. I will look out for the club’s results. But after this deal – and the torrent of abuse I received for questioning it – it is farewell Watford FC – I really have, at last, stopped caring.