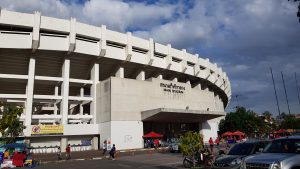 The sooner the mid-season transfer window opens the better; there are simply too many rumours swirling around the Chiang Mai team of deals done and deals to be done.

It has clearly affected both management and players. This was a poor performance and a very average game of football. Rayong are not a good side – but they took the two chances that were gifted to them; their back three marshalled by the impressive Cardozo were efficient and their goalkeeper when tested, which was rare, rode his luck.

The transfer window in Thailand is open from June 24, 2019 to July 19, 2019. Starting after the first round of 15 matches. Rumours include any or all of Evson, Thossapol and Ekanit leaving the club. The arrival of a new Technical Director of Football and his Assistant suggests that coach Carlos Parreira may also move from the club.

In addition no one appears to know where the club will play its home matches after 1 July 2019.

So much uncertainty. The mindset of players leaving the club is already elsewhere. They are playing less for the club and more for their careers; their focus is getting through the match and avoiding any injury.

Thossapol has been the beating heart of this team for two years; committed, strong and a genuine leader. Today he was a shadow of that player. That affects those around him including his defensive partner, Evson.

Ekanit started effectively but was innocuous in the second half. Azadzoy had a quiet game. Eliandro worked hard and had his chances but he looks like a solo battering ram badly in need of support.

For twenty minutes little happened before a couple of half chances for Eliandro as a free kick reached him at the far post, it should never have got that far, which bounced wide and a mistimed header from a corner which, as it slowly bounced up, had to be clawed away from the top left corner by goalkeeper Peerapong.

Pressing forward Rayong won a corner; both Nont and Eliandro tried to deal with the inswinger impeding eachother. Nont ended up pushing the ball to the ground where Apiwat calmly dragged the ball onto his left foot and shot home from ten yards.

What had been an even and disappointing first half ended 0-1 in favour of Rayong. 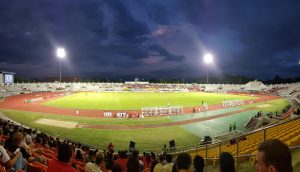 Whatever was said in the Chiang Mai dressing room must have sent the team to sleep. Within seconds of the restart Gionata was giving a woeful ball to Ariel who shot wide from twenty yards.

Anawin then shot high and wide from twelve yards when in space. He should have done better. Pornpreecha’s turn on the edge of the box also deserved better than his poor high and wide shot.

In an unusual moment one of the Rayong bench was given a straight red – presumably for inappropriate comments to a linesman. Meanwhile Rayong slowed the game down; with a series of dubious injuries needing treatment.

With twenty minutes to go Ronnachai replaced Suwannaphat. He was largely uninvolved.

A Pichitphong long range effort was scuffed wide; at the other end Ariel shot straight at Nont.

In the 83rd minute it was game over. Thossapol’s half-hearted challenge on Ariel left the forward to get to the goaline, hold the ball up and slide it to substitute Suppasek for a clinical finish.

There was time for Peerapong to quickly leave his line to save with his legs in a one-on-one with the persevering Eliandro.

Chiang Mai’s strength has been a battling team spirit. They do not have the talent of some other teams in the league. But today that spirit was less about battling and more about raising a white flag.

It was a thoroughly depressing performance. And next weekend Chiang Mai travel to Buriram who won 3-1 tonight away at League leading Port FC.

Chiang Mai remain 14th on 12 points; one point ahead of Suphanburi and Muangthong. There is still a long way to go. But the team needs to quickly settle on its management and playing squad for the second half of the season.