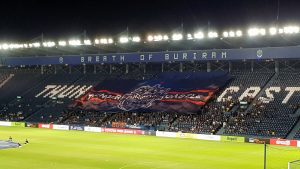 Our Saturday visit to Buriram United was always more likely to be about the experience than a positive result.

It is almost ten years since Newin Chidchob bought the club now known as Buriram United and relocated them from Ayutthaya to his home city.

It is eight years since the Thunder Castle opened as the club’s home stadium.

Since that investment Buriram has become the powerhouse of Thai football – while at the same time putting this small provincial town on the Asian football map. This is what a wealthy benefactor can do.

Imagine if you will, a first class modern stadium that can basically accommodate the whole population of the town that it is based in. That is Buriram.

The stadium is terrific inside and out. Inside there is not a bad seat. It is a purpose built football stadium with steep-raked seating and no bad views or supporting pillars to obstruct the view, not even from the away supporters pinned in behind a corner flag.

Outside – lots of parking, two hotels, an international standard racing track, training facilities, a big club store and even a 7-11. There are complimentary tours of the stadium. Imagine a tour of the 700th Anniversary Stadium in Chiang Mai!

In Chiang Mai we cannot even be bothered to replace the broken perspex on the matchday dug-out.

There is one catch – it is all very well having a stadium that seats 32,600 fans. But what if only one quarter of that number turn up? It looks and feels depressingly empty. And that was the case last night for the visit of Chiang Mai FC and a crowd of about 8,000.

So there we were – about 200 supporters from Chiang Mai in a proper football stadium – it is hard not to be more than a little envious. This is Buriram. Their airport gets just four flights a day from Bangkok. Shopping malls are almost unheard of – though a new Robinson’s lifestyle centre has opened south of the city centre. There is little visible industry beyond agriculture. The biggest hotel in the centre has long been shuttered and is slowly being reclaimed by nature. But the roads are good; the city is growing and much of that is because Buriram United is everywhere. Logos on buildings; logos in bars; shirts worn by the people almost as if it is their duty. It is a statement of how much the club, and its owner, means to the town.

There is also a match to report – but for Chiang Mai fans it is another best forgotten.

We set out much as we did against Port FC with a 3-5-2 formation that played too much like a 5-3-2 as the wing backs sat so deep. At times in the first half the back five and midfield three were so deep and so close that it was almost 8-2. With this formation we were always likely to be over-run in midfield where Gionata, Pichitphong and Ekanit may be the shortest, and least intimidating, midfield in the League,

Buriram were fluid, fast and showed plenty of movement. Chiang Mai were under pressure from the start. Eliandro spend more time defending than he did in the Buriram half; one clearing header from a free kick was outstanding. Evson was solid…until he wasn’t.

Suphanat blazed over from 20 yards. Pedro Junior, who had a very quiet match and was substituted in the second half, completely missed his kick in front of goal, Narubadin smacked a shot against Nont’s crossbar and Supachak blazed a close range volley over the top. 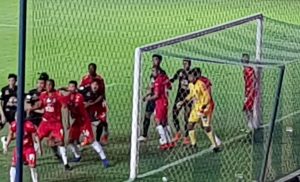 A series of corners gave a good indication of where the goal threat might come from. Inswinging corners were assisted by the wind and with the goal line populated like a BTS platform at rush hour Nont was left unsighted behind Nunez and Evson, though probably not impeded, as he helped Sasalik’s 39th minute corner into the net. It seems unlikely that anyone called for the ball.Though Evson could have done better to keep Tunez out of Nont’s shadow.

The half time score of 2-0 was harsh on Chiang Mai who held on until the 39th minute though offering very little in offense.

Buriram opened the second half comfortable to sit on their lead. At times the game was pedestrian with the only activity of note being a series of substitutions by both sides.

The game woke up in the 80th minute – Ekanit’s short range volleyed cross reached Eliandro who bulldozed his way to the six yard line where his prodded right foot shot rebounded off the crossbar. How a Chiang Mai goal could have changed the last 10 minutes.

Instead, and a little chastened, Buriram scored their third in the 85th minute – with Patino clinically finishing with the outside of his right foot – as the Chiang Mai defence backed off him.

Time left for a lovely inviting cross from Azadzoy to be met by a thumping header from Eliandro, again against the crossbar,

Into injury time, and as a final insult, with Buriram queued up on the 18 yard line Suphanat slotted home the fourth past a tired and beaten Chiang Mai defence.

4-0 did not flatter Buriram. At times it looked like a training exercise. Despite Eliandro’s efforts Chiang did did not have a single corner all match and Sivarak did not have to make a single save.

A poor result. A good day out and a lesson in how a football club and its city can bring out the best in eachother.