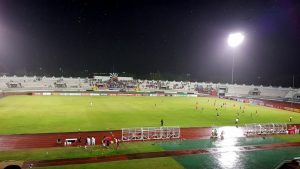 A new manager usually produces a bounce in form and effort and so it appeared last night in the penultimate game for this season to be played at the 700th Anniversary stadium in Chiang Mai.

The effort was there. Chiang Mai twice took the lead against third place Samut Prakarn. But two moments of poor defending were enough for Samut Prakarn to twice equalize and for the game to play out to a fair 2-2 tie.

Chiang Mai’s new coach played just one of his four new hires. Decha given a start iin the number 40 shirt.

The early chances fell to the visitors. Jaroensak’s close range effort was blocked by Nont at his near post; Picha’s low effort from 25 yards producing a good sprawling save from the Chiang Mai goalkeeper.

But in their first attack of any conviction Eliandro held off a weak challenge from Jaroensak to cut inside and shoot; his effort was parried by Patiwat out in front of goal where Ekanit’s brave stooping header knocked in the rebound from six yards.

The lead was gone by half time. Surawich gave away a needless free kick 25 yards from goal. Jakkapan’s first effort was blocked by Evson but the referee ruled that Evson had encroached closer than ten yards and the kick should be retaken.

An angered Chiang Mai team protested – the crowd joined. Here is a revelation. The referee was entirely right. And Evson was booked. See the screenshot below. 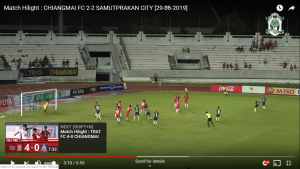 The freekick was retaken; this time Jakkapan’s shot cleared the wall – his effort could only be pushed against the post by the diving Nont – rebounding in front of goal where Sarawut reacted faster to tap home on the goal line. One-one at half time.

Two minutes into the second half and Chiang Mai were back in front. Eliandro broke down the right; cut inside for Azadzoy who slipped the ball to Ronnachai though it was the defender’s challenge that knocked the ball back in to the path of Azadzoy who finished instinctively from eight yards.

Again the lead was short lived; Wanmai and Gionata both failed to challenge Ibson Melo who delivered the ball wide right for Jaroensak whose low firm cross reached the back post where Picha got goalside of Azadzoy to slide the ball home; hitting the goal post himself with some force in the process.

Both sides were reduced to ten men after Wanchai and Picha swung handbags at eachother before a Samut Prakarn corner. A straight red for Picha while Aris made sure that he applied enough pressure on the referee to ensure that Wanchai received a second yellow card for his sending off.

There were some good signs. A more attacking style of play with a higher press. The early substitution of a forward, Ronnachai, for Pichitphong. All signs of intent. Ekanit was still with us, looked willing and scored. Eliandro is still with us. Keep both of these players through the transfer window and we still have a chance of escaping relegation.

But we missed Tossopol at the back. Wanmai is not good enough and was at fault for the Samut Prakarn’s second goal before he was sent off for a silly bout of shoving.

The bad news – Suphan Buri won last night and their three points takes them above us in the table as we sink to the bottom. A draw really was not enough.