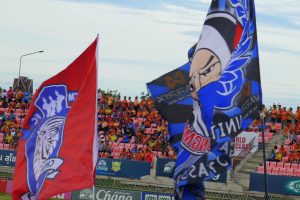 Three successful debuts; two outstanding goals, a goalkeeper as man of the match and best of all an away win. Icing on the cake indeed.

The four year old Thung Thalay Luang Stadium is home to Sukhothai FC. In theory the capacity is around 9,000. That would be crowded. It is a purpose built football stadium on the north side of the city. Maybe the remote location deters local fans; or maybe they were all in Big C which was absolutely packed. It was easier to park at the football stadium.

It is a shame – the fans who were there saw a good competitive game of football.

Chiang Mai gave debuts to Pairot in goal and to Caigue, a Brazilian striker on loan from Chiang Rai. Decha started again in place of Pichitphong. Sukhothai gave a home debut to Irvin Herrera but their main threats were to come from the ever-present John Baggio and the left foot of Iain Ramsay.

The early stages were evenly contested. Evson heading an Azadzoy cross over when he really should have done better and a Kongnateechai shot cleared the bar for Sukhothai. Evson and Pairot tangled as Baggio set Kongnateechai free; between them shovelling the ball out for a corner.

23 minutes gone and Decha was stretchered off. His second game for the Lanna Tigers and his second injury related substitution. The good news is that this allowed Chiang Mai to make an important change. Netipong came in for his debut and slotted into a back three with Evson and Suwannapat; the latter perhaps having his best game of the season. Wanmai pushed forward into a holding midfield alongside Gionata.

A minute later Chiang Mai took the lead as Surawich’s outswinging corner was headed clear by Jung straight to Ekanit on the edge of the penalty area. He took a touch to his right side, looked up and planted a powerful side-footed shot which Kittikoon could only get a hand to away to his right. Top class.

Into injury time at the end of the first half and Ekanit cut a ball inside for Caique who shot straight at Kittikoon. Jung was then penalised for a lunging foul on Eliandro as the big Brazilian bulldozed into the penalty area. Nineteen yards from goal this looked too close for a shot over the wall. Surawich and Wanmai played a quick game of stone, paper scissors (seriously!) while the referee sorted out the jostling in the wall. Surawich left the free kick for Wanmai who chipped the wall with ease to score a fine free-kick away to Kittikoon’s right side. The wall was awful and Baggio should never have been in it.

2-0 at half time and Chiang Mai were well worth the lead playing with confidence and purpose.

Which made the decision to try and sit on the lead in the second half a strange one as Chiang Mai moved to a back five and sat deep.

This was to be Pairot’s half with at least five fine saves. In the 50th minute he punched clear a 25 yard piledriver from Piyarat. He then leapt to his right to turn Ramsay’s curling left footer away for a corner. Even better was his reaction save to a close range Baggio volley in the 77th minute. Baggio was a yard offside but the linesman was resting and there is no VAR. Four minutes later after flapping at a corner (not everything was perfect,) which the defence then failed to clear, Pairot took off to his left to turn away Kittikai’s curling 25 yarder. Finally he was bravely off his line to deny substitute Kittipong who was booked for a late challenge. It was a fine debut and rightly a man of the match performance.

Baggio, always involved, was lucky to still be on the pitch after a ballbusting incident where standing behind Evson before a free kick he launched a kick between the defender’s legs; ignored by the referee but clear in the tv highlights.

Pairot was beaten once – Kittikai had come on in the 56th minute for Piyarat and looked lively – outjumping Chotipat, a substitute for the injured Azadozy, to head home a Ramsay freekick in the 63rd minute.

A 2-1 lead with nearly thirty minutes to go. Nervous times. But it did encourage Chiang Mai to press forward mainly through Eliandro whose close range effort from a narrow angle was saved by Kittikoon while Ekanit put Caigue though on goal for Kittikoon to be quickly off his line to save.

Pichitphong came on for Caigue with fifteen minutes to go as coach Surapong looked for his first win as Chiang Mai coach.

Pairot’s heroics and strong defending from Nettipong, a fine debut alongside Evson and Suwannaphat, saw out a valuable win for Chiang Mai. 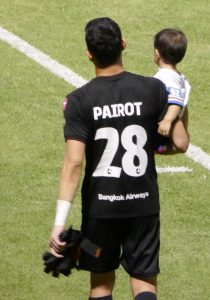 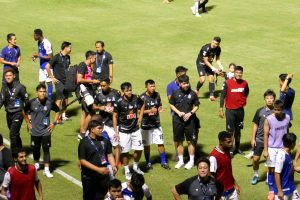 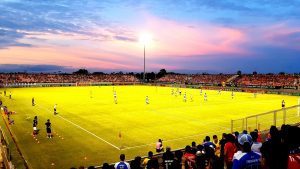 Carlos who? Carlos Parreira did great things for Chiang Mai with zero support from the owners. But sometimes change is good. Maybe it is the new coach/manager “bounce” but Coach Surapong has given the team a sense of belief and the players seem to have responded positively to the change. Four points from six is an excellent start – and necessary when teams in the bottom half Thai League 1 are all showing better form. As a write this SCG Muangthong have just beaten Bangkok United 3-2 with a terrific strike from Heberty in the 92nd minute.

Ekanit is class. His touch, look and shot for the first goal was outstanding. We know he scores quality goals; his goal at Port was memorable but his two goals against Samut Prakarn and Sukhothai were scored when it mattered. It will be a disaster for Chiang Mai if his loan is terminated by Chiang Rai in this transfer window.

Wanmai looked far happier in midfield. He scored a screamer in the bizarre game at Chonburi – but again he scored a quality goal at Sukhothai when it mattered. He will presumably miss the next game after last week’s sending off.

Pairot’s goalkeeping gave confidence to the defence; Evson was a rock; he is no saint but not much gets past him. Nettipong looked good on debut.

And then there was Caique. He was comfortable in possession; he has height and pace. And he looked like he enjoyed his night’s work. Yes he is only on loan but he should be an asset for our remaining thirteen games.

Staying up still looks like a challenge. There is no easy game in this league. But the last two games offer plenty of encouragement.

Once again a word for the terrific away support from the Chiang Mai fans who out-sung and out-drummed the home crowd.

Next Friday, 12 July, is our last home game for the season at the 700th, against SCG Muangthong. Hopefully there will be a good crowd.