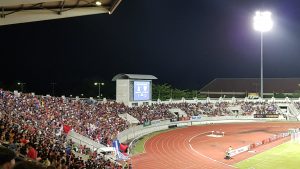 The biggest home crowd of the season; new players; a one goal lead until the 85th minute; a resurgent SCG MuangThong reduced to ten men for the last 55 minutes.

This feels so much like a lost opportunity on different levels.

One point instead of three will leave us at, or one place off, the foot of the table after the weekend. But it was the crowd and the atmosphere that showed the club’s owners what can be achieved in Chiang Mai despite the underwhelming efforts on their part. Officially the crowd was close to 12,000; most observers suspect more.

This game was clearly something special for the Chiang Mai fans; it showed in the traffic queues which were awful, the ticket queues and the just-get-into-the-stadium queues. A good night for the vendors at last. Chiang Mai FC said farewell to our home stadium, at least for 2019, in style.

Once inside there was plenty of colour and noise. A good turnout from MuangThong’s fans helped make this feel like an old-fashioned cup tie.

Only four Chiang Mai players who started the away fixture on 9 March made the starting line up last night. Chiang Mai gave a debuts to Apisit Sorada and Nattawat Sombaryotha. With Evson missing after four yellow cards the back three comprised Suwannaphat, Wanmai and Netipong. A makeshift back three against Heberty, Derley and Terrasil, prompted by Ernesto from left midfield, arguably, at present, the best attack in League 1.

MuangThong have also made changes in the transfer window; just six of their March starting line-up at home to Chiang Mai started this away fixture.

But they have bought well and came to Chiang Mai on the back of three successive league wins including a thriller last weekend in a 3-2 win at home to Bangkok United.

One pundit predicted a 4-0 away win. But the old 700th Anniversary Stadium had only seen two defeats for the home team this season with four matches drawn and just two home wins.

Chiang Mai fashioned the first chance from the kick off with Caique’s low cross too far in front of Eliandro at the back post. Caique would then win Chiang Mai’s first corner. With both sides pressing forward Teerasil looked lively for the visitors and ran around to the near post to head a free kick wide before shooting over from distance.

A good catch from an Ernesto cross will have given Pairot confidence on his home debut.

At the other end Caique was clear on goal before Ernesto’s finely timed challenge gave away a corner which Chotipat headed over from a good position.

It was Chotipat who would open the scoring after 19 minutes – a short ball into his feet on the edge of the area from Ekanit, one touch, pivoting to his left and curling the ball in from 20 yards off Van Lam’s left hand post. A super goal.

MuangThong came close to an immediate reply; Ernesto’s cross to the back post was headed down for Teerasil who scuffed his eighteen-yard shot but it beat the defence and Pairot before rebounding off the right upright. Minutes later a Teerasil free kick narrowly cleared the crossbar before Heberty made space on the edge of the area to drill a shot low to Pairot’s right which the goalkeeper saved well plunging to push the ball around the post for a corner.

More drama in the 36th minute as Caique’s clever pass from midfield set Gionata free on goal until 30 yards out he was brought down by Adisorn. As the last defender the referee had little choice other than to give Adisorn a straight red card. One man down and one goal down for the next 55 minutes the game appeared to be Chiang Mai’s to win.

Wanmai’s free kick hit the wall; Eliandro blasted over from 20 yards; Nattawut’s cross was headed out for a corner and Gionata shot straight at Van Lam from a narrow angle.

Which they did effectively coming out to dominate the early minutes of the second half. Two Heberty free kicks clearing the cross bar. Then a fine Wanmai block in the penalty area.

At the other end Gionata fired over from 25 yards before MuangThong pressed forward again with a Heberty header, from Derley’s cross, comfortably saved by Pairot.

Chotipat, playing with a shoulder injury, was further hurt in the challenge with Heberty and immediately substituted by Azadzoy. Worawat would also come on for the last 30 minutes replacing a weary looking Netipong.

MuangThong also made an important change. Sanukran coming on with just over thirty minutes remaining.

60th minute and it could have been game over. Ekanit’s balanced run in midfield and perfectly weighted pass was picked up by Nattawut whose clever chip over the advancing Van Lam dropped down off the crossbar, just evading Eliandro.

70 minutes; Pairot leaps to his right to punch clear a cross. Abisit is booked. Wanmai and Ekanit will also be booked in the final minutes.

85 minutes gone. A long ball forward. Derley takes a touch; his shot is blocked but falls for Sanukran who steadies himself and hits a fine left foot volley into Pairot’s bottom left corner. 1-1 and in fairness no more than MuangThong deserved.

Six minutes of injury time and it was MuangThong pressing for a winner; Derley heading over the bar and then a thirty yard Heberty free kick flew inches wide with the wall and Pairot beaten.

With ten men MuangThong did look the fitter and stronger side in the second half. But Chiang Mai had their chances – so both managers are likely to be a confused mix of satisfied and frustrated.

For Chiang Mai the signs are good but confusing. There have been seven new signings, three (I believe?) on loan, in the transfer window, together with the appointment of a new coach. Where was this investment at the start of the season when the cub basically played the first half of the season with the 2018 promotion squad and two replacement Brazilians? Are the owners now committed to trying to keep Chiang Mai in League 1?

Not all of the new players have had a great deal of match time at their previous clubs; their fitness and confidence as a new squad will improve. Caque, Netipong, Apisit, Nattawut and, of course, Pairot all show promise.

For the rest of the season Chiang Mai’s last six home games will be played at Chiang Rai. How will that impact the club’s fortunes? Will there be a good turn out of fans from Chiang Mai? Will local Chiang Rai fans come out and cheer for their not-so-close neighbours? What is happening on 31 July when Chiang Mai and Chiang Rai have home matches scheduled at the same venue the same evening?

All that must wait until after two away games, at Ratchaburi and (co-incidentally) Chiang Rai. We probably need at least a win from one of those games to stay in touch with the lower half of the table.

It was great to see and hear a big crowd and the team responded with a spirited performance. An opportunity lost. But hopefully a message delivered to the owners.