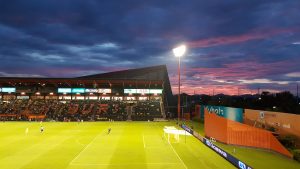 There were two moments in the second half that said everything about the away team’s performance on Saturday evening in Ratchaburi.

Losing 1-3 Chiang Mai had a free kick on the half way line. Caique and Eliandro are on the Dragons 18 yard line. Other than our opening goal they have hardly had a kick. So we pass the ball backwards.

Two minutes later Evson tries to play out of defense. He passes wide to Netipong. The big defender has two orange shirts pressing and can only back heel the ball out of play. Evson and Netipong look at each other like they have just met.

The game had started so much better for the away side.

Ratchaburi have their own football stadium some ten minutes drive from the city centre. Opened in 2016 with stands on three sides for ten thousand fans, lots of car parking and adjacent training grounds. It is a quality facility.

Heavy rain through the afternoon stopped before kick off. The pitch drained well leaving a slick surface.

Narit returned in goal for his first appearance since the Chiang Rai fiasco. Pairot unable to play against his old club.

How things change in the mid season transfer window. Ratchaburi’s starting 11 had just three players from their smoggy defeat in Chiang Mai on 16 March. The head coach position is also vacant. After this win that may be a way forward. Three of their new signings, Patino, Karaboue and Jun-su Yu were to be influential in this match.

Chiang Mai missed the influential Ekanit who has now returned to Chiang Rai. Caïque, Apisit and Netipong were the three newer players starting at Ratchaburi.

The opening exchanges were even. Karaboue stretching for a cross at the far post. Narit catching Kritsananon’s cross.

Chiang Mai won the first corner; dropped by new Dragons goalkeeper Kittipong but not into danger.

The first clear chance came to Ratchaburi after 15 minutes. Evson’s poor clearing header was directed into space outside the penalty area.

Narit parried the 20 yard shot out in front of goal where Philippines international Patino’s first effort was blocked by Evson and his second effort was a comfortable catch for Narit.

Jirawat’s long range effort was a comfortable save for Narit while at the other end Kittipong under pressure got his feet in a tangle to concede Chiang Mai’s second corner. Lots of jostling on the edge of the area appeared to result in a yellow card for Eliandro.

The corner was taken short for Apisit’s first time cross to be punched clear by Kittipong.

Jirawat’s well-timed tackle halted a Caique break. At the other end Gionata’s foul on Steeven resulted in a free kick that was banged off the wall for a corner. The clearing header was picked up by Karaboue but the shot was tame.

Chiang Mai’s best moment and the opening goal came from a fast sweeping move as Azadzoy on the centre circle turned his one touch pass wide to Caique who cut the ball inside for Eliandro on the edge of the area. Two touches with his right foot, holding off Roller and thumping his finish into the roof of the net from six yards. A fluid, strong, confident goal.

Which made everything that followed so disappointing.

The Dragons equalized eight minutes later. A flat curling cross from Roller was met by Patino, Evson and Narit. The referee gave a corner. The linesman who was looking straight at the action was clueless. I suspect that a goal kick would have been correct.

The outswinging corner hits the chest of Jun-su Yu, bounces of Evson back to the big Korean defender who touches the ball to his left and drills it past Narit. 1-1.

Surawich broke down the right to win another Chiang Mai corner. Ratchaburi cleared the corner bursting forward with Karaboue blasting high over when a wide ball to the unmarked Roller was a far better option.

43 minutes gone and another Ratchaburi break on the right, another low Roller cross. Confusion on the six yard line as Narit, Surawich and Karaboue all stretch for the ball. Surawich wins it but pushes it straight out to Pichitphong, the ball bouncing off the veteran, passed the grounded goalkeeper for a very untidy own goal.

2-1 to Ratchaburi at half time. Luck had favored the home side.

But it was all over soon after halftime. Ratchaburi pressed forward. A corner in the 47th minute. Then the third goal as another Roller cross to the back post saw the first shot partly blocked but falling to the unmarked, and probably level rather than offside, Patino for a tap in from six yards. 3-1.

Atthawit came on for his debut replacing Surawich. It made little difference.

The Dragons were showboating by this stage. Pichitphong getting booked for a challenge that was more frustrated than reckless.

64 minutes gone and a flowing move down the right ended with Roller curling his shot over the crossbar.

67 minutes gone and Karaboue cuts through midfield, sets up Roller who takes one touch and clips the ball over Narit. 4-1.

This was getting too easy. Netipong was booked for a clumsy tackle. Another Roller break as he eased past Suwannaphat before Netipong put the ball behind for a corner and his final contribution as again he succumbed to cramp. Patipan came on as his replacement.

By this stage tired legs were playing out the game. Chotipat came on for Apisit. Narit saved from Patino and then from Steeven. Atthawit’s twenty yard free kick cleared the bar onto the roof of the net as Chiang Mai looked for a late consolation.

All over. And Chiang Mai were well beaten. Fortune clearly favored the home side with their two first half goals. But the crowd of 4,117 saw Ratchaburi dominate the second half. 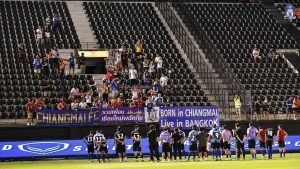 In Roller (he must have been the man of the match), Karaboue and Steeven, Ratchaburi had pace and quality. Patino also looks a good addition to the Dragons front line.

Against this pace Chiang Mai started with Gionata, Pichitphong and Surawich in midfield. They were always going to be under pressure. How Eliandro and Caique might prosper if they received the quality of crosses that Roller delivered for his forwards.

So we go to Chiang Rai next week presuming again that our loan players will not be available. Then in the third of three successive away games a visit to Chainat on 3rd August. Tough times ahead.