It would be too easy to dwell upon everything that was wrong with this mismatch in Chiang Rai on Sunday evening. And I will, but later.

Instead let’s celebrate the last 15 minutes of samba football that gave the big turnout of Chiang Mai supporters something to cheer about.

0-2 down with fifteen minutes left. Evson moves from centre back into the front three alongside Eliandro and Atthawit. Playing almost as a right-winger the big Brazilian almost turned the game around.

In the 78th minute he danced down the right wing timing a perfect through ball into Eliandro’s stride. Eliandro controlled with his right foot, turned and shot left footed from 12 yards onto the base of the far post.

Four minutes later a near replica move; but this time Eliandro was closer to goal and Apirak was quickly off his line to block the forward’s shot; the only real save that the ex-Chiang Mai goalkeeper had to make all night.

But Evson was not done yet. In the 89th minute Wanmai’s clever chip found Evson running through the center forward channel holding off a weak challenge and volleying low from eight yards past Apirak, who may think he could have done better. 2-1. Cue jubilation among the Chiang Mai supporters.

Into injury time, Evson wins another corner, although this was catching practice for Apirak; before Evson was hacked down in the centre circle by Sarawut before he could do any more damage.

Five minutes of injury time were enough for the referee but the Chiang Mai fans were in no hurry to leave without paying tribute to a strong second half effort.

The game was of course a mismatch orchestrated by the owners of Chiang Rai FC which should embarrass the Thai League and, should Chiang Rai win the title, lead to some hard questions from the other title chasing teams.

Chiang Mai were limited to a squad that included just two of ten Chiang Rai loan players, Yuttajak and Chonlawit both as substitutes. For obscure reasons Azadzoy was also again unable to play against his old club. Pichitphong was under a one game ban for four yellow cards. Chiang Mai had a squad of just 17 players available for the game. Caique, Saharat, Chotipat, Gionata, Decha and Azadozy made up a list of six regular starters who were unavailable.

The first half was to resemble a training match with the Chiang Mai fans celebrating rare excursions into the opposition half. The first half corner count was 7-0 in favour of Chiang Rai with two corners in the first four minutes.

Atthawit was booked for a hack on the half way line. Evson then was hurt in a challenge with the offside Phitiwat in the Chiang Mai penalty area. The third corner came after Evson blocked William’s effort on goal and from Yong Rae’s corner Sarawut’s powerful header was narrowly wide.

Peeraphong then curled a right footer wide from 22 yards before Pairot acrobatically turned Phitiwat’s rasping shot over the crossbar.

William put Rosimar through on goal for the forward to be narrowly offside. Ekanit’s left foot effort from 20 yards was easy for Pairot but a warning of what was to come. Suwannaphat then doing well to block a Rosimar effort.

Ekanit then set up the impressive Yong Rae whose drive was punched clear by Pairot for another corner.

In a rare break Nattawut’s shot from distance was straight at Apirak after a good advantage by the referee.

From Chiang Rai’s seventh corner Brinner this time headed over the bar.

The first goal after 40 minutes was as inevitable as was the scorer. Ekanit running between Surawich and Netipong onto a lovely pass from Phitiwat, holding off Netipongs’ challenge and thumping left-footed past Pairot and in front of the travelling fans. In fairness a high quality goal from the best player on the pitch. To his great credit he held up both hands looking almost apologetic.

Chiang Rai have a crucial home match against Buriram United on Wednesday 31 July. Second versus first. Maybe that was in their minds as the second half was much better contested.

Chiang Mai won three corners in the first ten minutes of the half. Apisit’s rasping shot was blocked by Somkid from the first corner before Atthawit’s shot cleared the crossbar.

Dangerous on the break, direct from a Chiang Mai corner Ekanit found William whose attempt at goal was comfortably wide with two unmarked team mates in the penalty area.

Rosimar’s crossfield ball from the right then found William in a one on one with Pairot who made a smart save quickly narrowing the angle.

A quick note on William; no one should wear shorts that tight and that short. They must restrict both his movement and the blood to his brain as he appears to have little awareness of the movement of his fellow strikers.

Chiang Rai’s eighth corner was comfortably caught by Pairot but with 57 minutes gone their tenth corner awas headed home by Rosimar running in front of Evson to the near post. The simplest of goals.

2-0 to Chiang Rai. Pornsak came on for Nattawut and Yuttajak for the struggling Ronnachai. Atthawit pushed up alongside Eliandro. One of the symptoms of this mismatch – Chiang Mai did not have a single striker available among the substitutes.

Comfortable to sit on their 2-0 lead Chiang Rai looked well set until Evson’s move into the front line for the final fifteen fun minutes.

Chiang Rai still had their chances – Rosimar blazed over from 18 yards when he should have at least hit the target; two corners were punched out by Pairot; the second with much greater conviction, But the last ten minutes belonged to Evson. Single-handedly he gave the Chiang Mai supporters something to cheer.

With only 17 points from twenty games and just ten games to go Chiang Mai look like a relegation certainty. At least another 15 points would be needed from those final games for any chance of safety. But if we are to go down then we should be going down, as we did on Sunday, with all guns blazing. 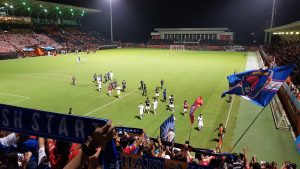 It was great to see coach Carlos after the game. He took the trouble to walk around the back of the stadium to meet up, talk and take pictures, with the Chiang Mai supporters. Class.

There are plenty of other comments on the farce of two clubs in the same league having the same owner. Chiang Rai have six points from their two matches with Chiang Mai after ensuring that in both games the Chiang Mai side was a shadow of the regular full strength team. Other title contenders should be furiously protesting to the League.

The drive to Chiang Rai is a horror story with route 118 stripped, muddy and pot-holed through endless roadworks for much of the first 100 kms. We came back to Chiang Mai via 109/107 through Fang and Chiang Dao. At five hours that is also a long drive.

While the 700th Anniversary stadium is clearly in need of renovation a better solution for the AFC Under 23 tournament would surely have been to play the matches in stadia that are already fit for purpose – and if an international airport is required nearby – then Chiang Rai’s Singha stadium would have been a much better choice than Chiang Mai. Any renovations could then have been carried out in the off season.

Ekanit is a genuine talent; two footed, quick and strong; his first touch is always on point and his distribution and subsequent movement are impressive. His return to Chiang Rai may be just what is needed to challenge for, and even secure, the League title.