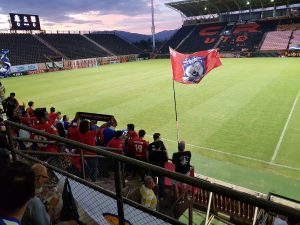 Normally I can find something positive about my team from any game – but other than Caique’s fabulous goal there was very little for a good number of long distance Chiang Mai fans to celebrate.

Spare, at this point, a thought for the small number of away fans from Trat. Every away game for them is a journey; to Chiang Rai almost qualifies as a pilgrimage.

It was 28 April when these two teams met in Trat. The 4-0 defeat there was a season low for Chiang Mai; perhaps only matched by this tepid loss to the same team.

Trat have enjoyed a good middle of the table season after promotion, with Chiang Mai, last year. Ten of the players that started for Trat on 28 April started last night; the only addition being the Japanese midfielder Yuki Bamba. That continuity suggests a team that is very settled in their style and League status.

By contrast ony three Chiang Mai players have featured in both games.

Trat rely, in that classic way, on building a team around a solid spine. Todsaporn in goal had little to do but his handling was assured. The tall SIngaporean center half, Baihakki, played Eliandro out of the game. Though in fairness to the big man he never stopped trying. Bamba and Bireme added pace from midfield and Durosinmi and Doumbouya were pacey and strong up front.

The game actually started well enough for the “not-really-at-home” team. An early corner, a crossfield pass from Azadzoy that Apisit, through on goal, could not control. Caique volleying a low cross in front of goal that evaded Eliandro and was blasted over by Azadzoy.

But it was also clear where the Trat threat would come from; Pichitpong was booked for a trip on Durosinmi; Evson made a last ditch tackle on Doumbouya after he had eased passed Suwannaphat and Wanmai was also booked for a foul on Doumbouya as the Guinean forward took on Evson in a race down the left wing.

An overhead kick from Bamba looked spectacular but was well over the crossbar.

After 26 minutes Trat took the lead. Bireme galloped down the right, his cross evaded both Bamba and the covering Evson reaching Doumbouya who held off Wanmai’s tame challenge, took one touch and swept the ball home with his right foot,

Four minutes later it was 2-0 with a near carbon copy goal. This time Chiang Mai were guilty of trying to play short passes out of defence. Pichitpong was caught in possession and the ball knocked wide for Bireme. His neat wall pass with Bamba cut open the defence and Bireme’s short low cross was little more than a tap in for Durosinmi.

Bireme should really have added a third in first half injury time. Set up by Wonsakom, Bireme had time to pick his spot but he close a comfortable height close to Pairot who got his angles right.

Half time and Chiang Mai had not had a shot on goal. Trat had been fast and effective on the break, well supported from midfield.. They had pressed high whenever Chiang Mai defended and they were happy to use the long ball into space for their forwards to get in behind Chiang Mai’s back three, where Wanmai and Suwannaphat both had games they will happily forget.

The second half opened with a little more purpose from Chiang Mai. Azadzoy’s cross broke for Apisit to shoot high and wide. At the other end a direct run from Bamba, as the Chiang Mai defence backed-off, ended the same way, high and wide.

58 minutes gone and Caique single-handedly brought Chiang Mai back into the match. Running from left to right across the pitch he looked to be out of options other than passing the ball out wide. Instead, he straightened up, took a couple of paces forward and as Baihakki stood off him he thundered a right food drive across the diving Todsaporn from 22 yards just inside the far post. A goal from nothing and Chiang Mai’s first shot on goal of the match.

At the other end Bamba shot again over the bar when he should have better after collecting a poor defensive header.

Azadzoy then came close to leveling the scores after he bustled through some soft defending and tried to curl the ball from 12 yards with the outside of his right foot. He instead gave the Trat goalkeeper an easy save. If that had gone in……

Fifteen minutes to go and Chiang Mai had used all three substitutes bringing on Ronnachai (for the injured Azadzoy) Chotipat and Gionata.

76th minute. Bireme tried to walk the ball in on his own. 12 yards out from goal Suwannphat dived in from behind. It was very hard to tell if the defender got any of the ball which then broke to Bamba on the left. Confronted by Pairot Bamba shot into the side-netting.

In making the challenge Pairot appeared to twist his knee when his studs got caught in the ground. At the same time Doumbouya was sitting in the centre circle protesting something that must have happened off the ball as no-one saw it.

A seven minute stoppage saw Pairot stretchered off and Wanmai take over in goal with Chiang Mai reduced to ten men.

With three minutes of normal time remaining Trat made sure of the win. Dorosinmi sending the ball out wide to Bamba who drew Wanmai and cut the ball back from the by-line for Bireme to volley home with his left foot – making what was quite difficult look very easy.

There was still time for Trat’s Wongsakom to shoot over and Dorosinmi to shoot wide, much to the well-placed Doumbouya’s annoyance.

Officially there were just 443 fans at the game. Apparently the lowest attendance since Super Power had only 300 in 2017. The League have only their abject lack of planning to blame.

Six points are needed from the 25 and 29 August “home” games against Nakhon Ratchasima and Suphanburi but only the most optimistic of Chiang Mai supporters will be confident that we can rise for the city!