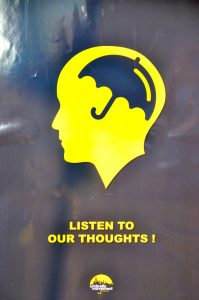 Just a month ago, on 25 July 2019, Khaosod English announced that “Khaosod and two other publications under Matichon Group announced a groundbreaking partnership with China’s Xinhua News Agency on Thursday.

The cooperation grants Khaosod, Prachachat and Matichon unlimited access to the Thai edition of Xinhua’s news materials and rights to republish them. A memorandum of understanding between the two sides was signed at Khaosod’s main office in Bangkok today.’

The story was accompanied by a picture of 10 supposed protestors and a stray arm.

The story is here.

This was not there first such poor editorial choice of China news – Khaosod had previously run a Xinhua fantasy about who was behind the protests in Hong Kong. As I noted on twitter at the time:

11 August: .@KhaosodEnglish just a reminder that this nonsense comes from your new “groundbreaking” partner. I have no idea why you have aligned with Xinhua but it seriously damages your credibility as an independent news source. @PravitR

China Xinhua News @XHNews
Who are behind the protests in Hong Kong?

The 19th August story of the ‘Save Hong Kong” rally was so preposterously false that it attracted adverse comment from many Khaosod readers.

This was my take:

19 August: How sad to see @KhaosodEnglish posting Chinese government propaganda from Xinhua. This hugely devalues and discredits their own independent reporting.
@PravitR
@zenjournalist

Andrew MacGregor Marshall critiques this article (as have many other commentators) stating:

“The story was clearly factually inaccurate. No credible independent news organisation has reported that 470,000 people joined the Tamar Park rally, and some basic investigation would show that less than 100,000 people are believed to have been there.

The story also makes no attempt at fair and honest reporting. It doesn’t mention the much larger pro-democracy protest at the weekend.

It claims all the violence is the fault of pro-democracy protesters, and that the people of Hong Kong are overwhelmingly opposed to the protesters.

All of this is simply not true.

And if Khaosod had made any effort to do some basic reporting or investigation, or had been following developments in Hong Kong, they would know it’s not true.”

The point is simple. Xinhua’s reporting on Hong Kong is a mixture or lies, misdirection and omission. Khaosod made it reputation by honest reporting from Thailand and by not khow-towing to Junta promoted news after the 2014 coup. For some reason China’s authoritarianism is seen as acceptable.

Particularly poor in this is Khaosod’s attempt to suggest equivalence between the news services of Associated Press and of Xinhua.

In 2016 and confirmed again in December 2018 the website MediaBiasFactCheck stated that “Overall, we rate the Associated Press Least Biased based on balanced story selection and High for factual reporting due to proper sourcing and a clean fact check record.”

I suppose at least complaints about the “partnership” had gotten a response from Khaosod – it is just a shame that the response was the editorial equivalent of digging an even bigger hole.

21 August: Complete and utter self-justifying nonsense from @KhaosodEnglish – they are not giving us multiple angles on Chinese news…just reposting anti-democratic Chinese government propaganda.

21 August: . @KhaosodEnglish You should tear up this agreement. It damages your brand, your reputation and your credibility.

21 August: .@KhaosodEnglish – if you do not understand why this is not the right time to be republishing Chinese g’ment propaganda then you have joined ranks with autocrats and dictators. Shame.

21 August: .@KhaosodEnglish If you want balance from HKG go and talk to these people – your attempt to justify your Xinhua partnership is embarrassing.

@pravitr on these notes is Pravit Rojanaphruk – once of Reuters and more recently of The Nation. He was held by the military junta on at least two occasions for “attitude adjustment” after protesting the 2014 Thailand coup. He is also widely respected as a man, and reporter, of principle and after leaving the Nation he joined Khaosod English in what was seen as a significant step up for the independence and quality of the online publication.

More recently the editor, Todd Ruiz, has left and not been replaced. Teeranai Charuvastra has the title of English language news chief and is responsible for the Xinhua agreement.

Charuvastra took to the Global Times – the english language publication of Peoples Daily, another state controlled publication, to suggest that Khaosod English was being “intimidated” and that somehow this was an issue of Westerners versus Chinese.

The Global Times article is here.

Some notes from the article:

Charuvastra said that his news site publishes stories about Hong Kong protests from two sources – Associated Press and Xinhua, as they want readers to get both sides of the story and decide for themselves.

The very idea that somehow the Associated Press and Xinhua carry equal weight and credibility is either misleading or ignorant. Maybe both.

The same article referenced me as an ex-Reuters reporter. So kind. So wrong. Reuters yes – but I have never claimed to be a reporter. Reuters had (and has) plenty of good ones already.

Charuvastra said he felt disappointed these Westerners reacted this way.

“It’s definitely shocking to us, because we are only trying to do our job. If this is the mind-set of some people involved in journalism, then how truthful and objective is their coverage of the ongoing protests? I think it is a very alarming revelation,” Charuvastra told the Global Times.

“If this is the mind-set of some people involved in journalism, then how truthful and objective is their coverage of the ongoing protests? I think it is a very alarming revelation.”

Charuvastra said that despite the “harassment and criticism,” his news site will maintain its partnership with Xinhua and publish its stories.

“We will not bow to external pressures.”

This is exactly as published, as Charuvastra appears to have repeated himself for effect.

The Global Times has also retweeted the article today as follows:

Global Times
@globaltimesnews
Westerners criticize #Chinese people for being close-minded and listening to only one side of the story, yet they are attacking my news agency for trying to bring different sides of the story to audience: @KhaosodEnglish chief bit.ly/2ZeuXmB

In a post earlier today Andrew MacGregor Marshall (who also gets an honorary mention in the Global Times article) neatly summed up the concerns of many Khaosod readers:

“The reason so many people are so disappointed about @KhaosodEnglish publishing blatantly untrue Chinese propaganda about the Hong Kong protests is not because we are trying to “intimidate” Khaosod English. It’s because we loved the courage and honesty of Khaosod English, which was a rare beacon of truth in Thailand’s extremely difficult journalistic environment, and it’s very sad to watch them throwing their reputation away.”

Charuvastra argues that the reader can make up their own mind about the reliability of the news source. This is nonsense of many levels. Khaosod retweets the articles without stating the source – it is only be clicking the article that you know it is from staff, AP or Xinhua.

His role at Khaosod and the role of any editor is as a gatekeeper. Respected news outlets cannot just post any news and effectively disown responsibility by saying “we trust our readers to make their own decisions on what to trust.” Reality is also that not everyone will know that Xinhua is a state owned news agency representing a nation that came 177th out of 180 nations in the Reporters sans Frontiers 2019 press freedom index.

Xinhua is not normal state media; it would be impossible to publish anything disagreeing with that article in China. Authors and editors would disappear.  Even countering Xinhua on social media or in private online conversations usually leads to deletion by AI or human censors. Try searching for Winnie the Pooh in China.

Charuvastra argues that people should be exposed to different angles on the same issue, especially if it is a deeply complex one. But readers are entitled to expect that a news organization they will due some due diligence on the content they are sharing with readers; and not present fiction as fact.

This is about as naive as a news editor can be:

“We are very pleased that we can report about China from two offices, two views and let people read, decide who they trust more……Who is right, who is wrong, people read it, they can judge it.”

We are supposed to decide whether we trust AP or Xinhua for news integrity and that the same weight is given by Khaosod to both. It’s embarrassing to watch someone get tied in knots trying to justify presenting state propaganda as a “balance” to other media.

This is not about westerners versus chinese. This is about fair and honest reporting versus state propaganda. Khaosod made no effort to ensure the accuracy of Xinhua’s reporting on the Hong Kong protests. Worse they almost certainly decided to republish the Xinhua “report” knowing that it was deliberately inaccurate.

On the one side we have good-faith journalism and on the other state-sponsored propaganda yet Charuvastra presents this as a choice of equals.

It should also be clear to you that it is not only “Westerners” who support democracy in Hong Kong and around the world…millions protesting in Hong Kong suggest a deep rooted concern for at a minimum the freedoms that were guaranteed under the Basic Law and which are being eroded.

Charuvastra has damaged Khaosod’s brand, credibility and the respect that people held for Khaosod English.

“There have been many angry comments and concerns expressed directly and indirectly to me over the past few days regarding Khaosod English’s decision to reproduce news and content from China’s state-owned mouthpiece media Xinhua News agency.
My views is that I disagree with any form of propaganda. The matter is beyond me, however, as it involves the decision made by the top management of Matichon Group which owns Khaosod English.
On a larger context, it demonstrates how dictatorial China is insidiously extending its soft power.” (you can read the rest on his Facebook page)

The problem is that many Thais are not well informed about regional or international issues. That Khaosod in promoting Xinhua is now colouring this debate with false claims and propaganda should be a matter of concern to many and certainly calls into question that overall direction and editorial control at Khaosod.

If I want to read Xinhua or Global Times propaganda I know exactly where to look.